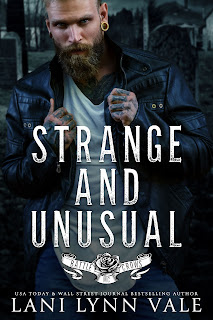 Note: An advance reader copy (ARC) was provided by the author via Author Uplifting Services.
We're back with the Battle Crows motorcycle club as Lani Lynn Vale releases the sixth book in the eponymous series. Strange and Unusual is Gracelynn Barry and Jeremiah Crow. Gracie's twenty-nine (and three quarters) and a pastry chef looking for a new place of employment after she renders her resignation at the restaurant she was working at AND breaks up with her boyfriend who just happens to be the head chef and her boss. Jeremiah's in his forties, I'm guessing, recently divorced, owns several businesses, and is part of the Battle Crows MC. These two meet during a bonfire with the rest of the club and end up sharing one unforgettable night. But the morning after brings with it some harsh realities. Not only is Jeremiah the owner of the bakery she has a scheduled job interview with, but he just so happens to be her ex-boyfriend's former stepfather. Awkward? Maybe. But life is about to get strange and unusual yet way more interesting for Gracie and Jeremiah...
Anyone familiar with Lani Lynn Vale's romances knows that they aren't your run-of-the-mill stories, and that sets her apart from a lot of other authors. With Gracie and Jeremiah's story, she definitely has it living up to the book's title. The things that happen to them, particularly Gracie, are quite unexpected, and that's coming from someone who is as prolific a reader as I am. At one point, I was even taken aback by the events that were playing out, but hey, it was all still entertaining as heck, if a wee bit...squeamish. At the end of the day, this was a story of overcoming adversity and embracing the possibilities the future may have even though a past experience has soured them to trying again. I'm giving Strange and Unusual four stars, and look forward to Dorcas and Bram's book which is up next!
-------------------------
Read my reviews for the Battle Crows MC series: