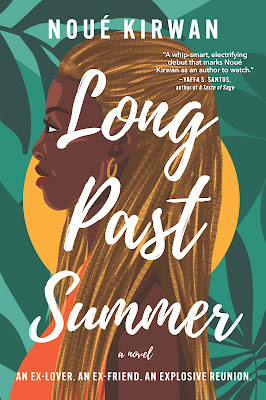 Long Past Summer
by Noué Kirwan
Date Released: August 2, 2022
HQN Books
About Long Past Summer
With the Southern charm of Sweet Home Alabama and the emotional complexity of In Five Years, Long Past Summer is a sparkling second-chance romance from debut author Noué Kirwan, written from the author's own perspective in the Black community.
It's hard to move on from a broken heart—and harder to move on from a broken friendship.
Mikaela Marchand is living the polished life she always planned for: a successful New York lawyer, with a promotion in her sights and a devoted boyfriend by her side. She’s come a long way from the meek teen she was growing up in small town Georgia, but the memory of her adolescence isn’t far—in fact, it’s splashed across a massive billboard in Times Square. An old photograph of Mikaela and her former best friend, Julie, has landed on the cover of a high-profile fashion magazine advertised all over the city. And when Julie files a lawsuit, Mikaela is caught in the middle as defense lawyer for the magazine.
Not only will she have to face Julie for the first time in years, Mikaela’s forced to work closely with the photographer in question: the former love of her life—and Julie’s ex-husband—Cameron Murphy. Mikaela needs to win the case to get her promotion—and as a junior partner, she has no margin for error. But unresolved feelings still exist between Cam and Mikaela, and jealousy always made Julie play dirty…
With flashbacks to summers of first loves and fragile friendships, Long Past Summer looks at the delicate and powerful thread that binds and breaks friends and flames.

An Excerpt from Long Past Summer
one
NOW
Mikaela took a deep, cleansing breath and rolled her shoulders back.
Breathe, she chided herself. She hadn’t even darkened the doorstep yet; a heart attack in advance of that seemed premature.
One of the doors to the gallery stood open in invitation, but it was the frigid air escaping from inside that was actually more enticing. It was unseasonably hot. A freak heat wave had made it a blazing, makeup-melting, fire-hydrant-opening, egg-sizzling-out-on-the-sidewalk day in New York City, in only early May. Still, Mikaela wouldn’t reward herself with the tempting relief offered inside. Instead, she just stood on the bottom step for yet another moment, lingering as the various city dwellers went about their business. Another typical Saturday afternoon along a cobblestoned street in Soho.
Despite its swank location, this art gallery was more nondescript than any of the other storefronts that lined the street, rather anonymously tucked in between several ultra-high-end fashion boutiques. Its entrance, an open doorway like an ominous black hole, sat among a sea of gleaming white and vibrantly colored doors. In the single large plate-glass window hung a poster advertising a photographer’s retrospective and the gallery’s address. Adorning the poster was a small reproduction of a picture that even now bedeviled Mikaela from no less than a magazine cover, a thirty-foot sign in Times Square and numerous subway station advertisements across the City. But now, looking at the size of the relatively unremarkable gallery, she guessed most of the exhibit’s undoubtedly extravagant budget must have gone to the rent on this place and the marketing for that poster alone.
The gallery itself was lo-fi, unassuming and minuscule, judging from her spot well outside of it. Mikaela pushed her sunglasses up off her face and peered through the dim doorway, head angling this way and that like an owl. Her feet remained rooted in place, fear-induced moisture popping out on her brow and nose, sweating through her carefully applied war paint. The problem was the sun made it hard to make out what further surprises might lie in wait for her on the other side of the door.
“It’s okay,” a voice said, startling Mikaela from behind.
Mikaela spun around. A young woman with a bright smile and a nearly white-blonde ponytail stood on the sidewalk below. She squinted without the benefit of her sunglasses, which hung neatly tucked in between her breasts on her floral ditsy-print sundress. One open blue eye appraised Mikaela, top to bottom.
“We’re open. They’re just putting the final finishing touches on everything but it’s all in there.” She took a step up onto the old wooden stairs then paused, waiting to see if Mikaela would choose to enter.
Rather, Mikaela stepped aside to let her pass with two large iced coffees in her hands.
Indecision still gnawed at her nerves.
“Is the photographer in?” Mikaela gave a courteous smile as the young woman continued past.
“Yup, should be. This is for him.” She raised one of the coffee cups. “He tries to come in for at least a couple of hours every day—he’ll probably be coming in more often leading up to the opening.”
Mikaela nodded as they changed places, backing down the steps as the young woman ascended. They continued to regard each other: the young woman with mild curiosity, Mikaela with acute wariness.
The young woman paused again at the top, just in the threshold. “Do you want me to get him?” She turned to the photo in the window then back to Mikaela. The beginnings of a smile curving the corners of her mouth. “Or tell him you stopped by? Miss…?”
For a split second, Mikaela saw the omnipresent photo in the window the way any stranger might.
Two girls on a swimmer’s platform on a summer day.
“Oh no, that’s not necessary.” Mikaela stood on the cobblestones again, heart thumping, resolve faltering. Not only the full glare of the sun but also her own discomfort burned her up, urging her retreat. She shielded her face with a palm, partially from shame, and hurried down the street.
She was half a long block away the first time she heard her name. She hadn’t heard his voice in over fifteen years, but she recognized it, quickening her steps.
“Mikaela!” he bellowed again over the ambient noises of the street.
It was still distant but closer.
Mikaela hazarded a quick glance over her shoulder. A figure made his way toward her, dodging pedestrians as he moved. Mikaela stepped into the street, raising her arm, waving her hand.
A passing yellow cab pulled over. She yanked open the door.
“Please drive,” she commanded. “I’ll tell you where to go in a second. Just pull off, okay?”
The cabbie eyed her through the rearview mirror then glanced farther down the street before understanding her hurry and doing as she requested.
A full minute later, he spoke, turning off the small bumpy street and merging into traffic on the smoother avenue. “Where to, miss?”
“Downtown Brooklyn, please.” Mikaela sighed. She swallowed through the lump forming in her throat trying to sort why his voice had upset her.
She had always imagined she would instinctively know if Cameron was in her city. Or that maybe they could walk past each other, simply another two strangers in a city of eight million. But today proved, for her, that wasn’t possible.
He is Cameron Murphy and I am Mikaela Marchand and as long as we remain who we are, that will always be a patently ridiculous idea.
Mikaela pressed the button lowering the window nearest her, sinking into her seat. She closed her eyes and took a deep breath of the thick, pungent city air that blew into her face as her cab sped down the windy expressway along Manhattan’s East River.
Excerpted from Long Past Summer by Noué Kirwan.
Copyright © 2022 by Noué Kirwan.
Published by arrangement with Harlequin Books S.A.

About Noué Kirwan
Noué Kirwan is a Bronx, NY native, raised between there and the Bay Area of Northern California. A graduate of the University of Massachusetts at Amherst, she currently, and for many years, has lived in Harlem, New York.
When she's not consuming copious amounts of media—binging TV shows, devouring movies, hoarding comic books and inhaling romance novels—she’s writing herself, dreaming up lives for formidable women and the men who love them.
Connect with Noué
Website | Twitter | Instagram | Goodreads