Review: Where You Are by Felice Stevens 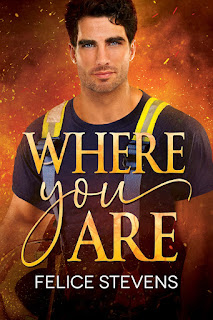 Note: An advance reader copy (ARC) was provided by the author.
If you've read Felice Stevens' Fall Guy (Ronan Michaels and Gabriel Sachs) and Influenced (Bryce Bauman and Matty Wilcox), then you may remember Isaac Seidel, who was Gabriel's best friend, and Levi Everett, younger brother of Jacob who is close friends with Matty. Stevens' new standalone, Where You Are, has these two as her main characters. That being said, this book can be read independently of the two other novels, so if you're either new to the author or have yet to read the aforementioned titles, you can feel free to dive into this new one without worrying you're missing any information.
Forty-year-old Isaac Seidel may still be recognized for his work as a young actor decades ago and maybe even his modeling, but it's his current job as a firefighter with the New York Fire Department, one that he's been at after the horrific events of September that he's proud of. When he's sent to the small town of Serenity, Pennsylvania to head a six-week special training program, he doesn't expect to experience the hottest one-night stand he's ever had, more so that said one-nighter turns out to be a volunteer firefighter from Serenity. But twenty-seven-year-old Levi Everett is very much in the closet although a secret fling is tempting. At the end, Isaac leaves and Levi stays. But can they ever let go?
You know you're going to get hit in the feels when you read a Felice Stevens book, and I'm certainly not complaining. Isaac and Levi's story may have begun with an unforgettable hook-up, but getting their feelings and emotions involved was very much all about the slow burn. That was something that I loved because it allowed for them to go beyond the physical and realize that what they had was far more than either of them bargained for. Kudos as well to a fine supporting cast of characters! I'm giving Where You Are 4.5 stars.
Release Date: 21 August 2022
Date Read: 20 August 2022
Learn more about Felice Stevens.
Pre-order Where You Are on Amazon.