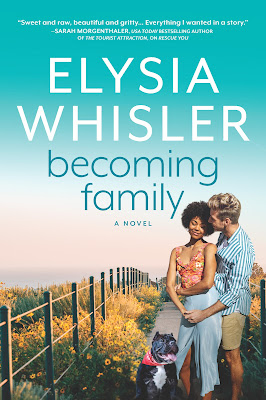 Becoming Family
(Dogwood County #3)
by Elysia Whisler
Release Date: August 16, 2022
MIRA Books
About Becoming Family
Family is a feeling.
There’s nothing like an important birthday to make a person realize all the things they haven’t accomplished. As Tabitha Steele blows out thirty candles, she makes a wish to take charge of her life. It’s a tall order, considering she doesn’t have much to show for herself since leaving military service. She works at a motorcycle shop but has never even ridden a motorcycle; she’s floundering in massage school; her social life consists of her aunt and her gym buddies; and her closest relationship is with Trinity, the service dog who helps her manage every day. She feels like an imposter in every aspect of her own life.
Playful and wild-hearted gym coach Chris Hobbs is Tabitha’s opposite. He likes to keep things fun and temporary, which is why he’s never tried to move the deepening friendship he has with Tabitha into anything more. But he’s the perfect person to help Tabitha discover her strengths. Then the sudden reappearance of his estranged brother forces Chris to face his past and the vulnerable part of himself behind the party-boy persona…and that means letting Tabitha in.
As difficult as it is for Tabitha and Chris to leave the old definitions of themselves behind, the journey is better with someone special at their sides, becoming who they’re meant to be, together.

Elysia Whisler was raised in Texas, Italy, Alaska, Mississippi, Nebraska, Hawai'i and Virginia, in true military fashion. Her nomadic life has made storytelling a compulsion from a young age. She doubles as a mother, a massage therapist and a CrossFit trainer and is dedicated to portraying strong women, both in life and in her works. She lives in Virginia with her family, including her large brood of cat and dog rescues, who vastly outnumber the humans.
Connect with Elysia
Website | Facebook | Twitter | Instagram | Goodreads