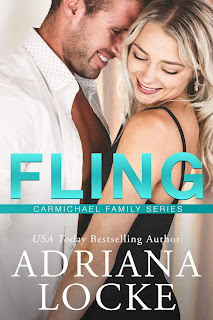 Note: An advance reader copy (ARC) was provided by the author via Candi Kane PR.
Dare I say that Fling may well be the hottest book Adriana Locke has ever written--well, at least the hottest among those I've already read since there are a few on her back list that are still on my to-be-read list. This is the second novel in the Carmichael Family series, and it's about the second to the youngest among the Carmichael brothers, Maddox. He's paired with Ashley Thompson, one of his closest friends from the time they were very young children. Over the past few years, a new element has inserted itself in their friendship--attraction, and it seems like it's mutual. But Maddox has actively avoided doing anything about it, what with Ashley never making it a secret that her happily-ever-after dream consisted of a husband and kids plus the proverbial white picket fence home. He's never seen himself settling down. So, why is it that Maddox can't resist entering a silly contest to join Ashley on what was supposed to be her honeymoon in the Bahamas?
Ah, Ashley and Maddox are going to be a difficult act to follow in this series! These two had the sort of connection that made you feel that they were always meant to be, if only they would get out of their own way. I loved that mix of friendly and flirty between the two, with genuine care and affection thrumming. I understood why there was some hesitation as far as crossing the line between platonic and romantic was concerned. After all, their friendship was something they both cherished immensely. Ashley and Maddox's story was sweet and steamy and everything good in between, and I enjoyed every single bit of it. Then there was Ashley's friendships with Rebecca and Sara--both of whom I hope will get their own HEAs, too!--and Maddox's family ties, all of which brought a smile to my face and enticed laughter from my lips. The standout among all supporting characters? BANKS. Such a scene-stealer that one! I know his book isn't the next one to be released, but suffice it to say that I can't wait to see who'll be giving him a run for his sparkly money. The bar's been set high by Maddox, though, with Fling getting five stars!
-------------------------
Read my reviews for the Carmichael Family series: