Review: Make You Mine by Laura Pavlov (Honey Mountain #3) 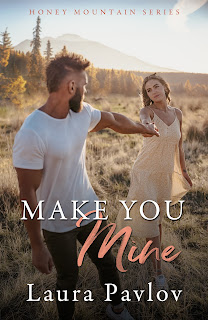 Note: An advance reader copy (ARC) was provided by the author via Valentine PR.
We're back in the small town of Honey Mountain with the third book in the series by the same name from Laura Pavlov! Make You Mine is a standalone, as were the first two Honey Mountain novels, Always Mine and Ever Mine, but there are recurring characters and potential spoilers with regards to what happened in the aforementioned books. That being said, this is Ashlan Thomas and Jace King's story, the former having just graduated from college and is the youngest among the Thomas sisters, each of whom gets a book in this series, and the latter being one of the firefighters who work under the Thomas sisters's father, Captain Jack Thomas, whom he considers a mentor and very close friend.
Being a single father to his two daughters, Paisley and Hadley, and a firefighter has made finding a nanny a priority for Jace King. The thirty-two-year-old thinks he's found the perfect candidate in Ashlan Thomas, a young woman he's known for years, thanks to the fact that her father is their fire station's captain and Jace and the rest of the crew have always been welcome in the Thomas home. Ashlan is smart, patient, and caring--and she happens to also be rather beautiful. But Jace knows better than to act on his feelings. Ashlan is a decade younger, his boss's youngest daughter, and the nanny to his two girls. However, the heart wants what it wants, but what may it end up costing Jace and Ashlan?
Le sigh. I totally adored Ashlan and Jace's story! These two had the whole sexual tension thing going on, due in large part to their resistance of what was blossoming between them. I loved that there wasn't this protracted issue regarding Ashlan's dad, and that the ten-year age difference wasn't made into this overly big deal. Their respective support systems were top-notch, and having such a great bunch of peripheral characters--from Ashlan's family to the other firefighters Jace considers family--but it's Jace's daughters, Paisley and Hadley that are the absolute standouts. Seeing this family come together and find their happily-ever-after is the biggest reason why Make You Mine receives five stars.
-------------------------
Read my reviews for the Honey Mountain series: