Review: Always the One for Me by Carrie Ann Ryan (The Wilder Brothers #2) 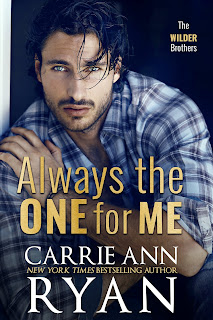 Note: An advance reader copy (ARC) was provided by the author via Give Me Books Promotions.
Always the One for Me is the second novel in Carrie Ann Ryan's The Wilder Brothers series, and it's a second-chance romance between former spouses Evan and Kendall Wilder. It took only a couple of days after meeting in Vegas for Evan and Kendall to realize they wanted to spend the rest of their lives together. But two years and one tragic event later, Evan makes the decision to walk away from Kendall and the life they were building, believing that doing so would protect the woman he loved. Eight years have passed, and now, Evan is working with his brothers to make Wilder Resort and Winery a success. Part of the team they've assembled is a talented chef who just happens to be his ex-wife. Whenever they're around each other, they're either at each other's throats or at one another's clothes. Kendall has always been "the one" for Evan, but even though their circumstances are different nowadays, will she forgive him when she learns why he left?
Is it weird that I love when there's a fair bit of groveling involved in a second-chance romance? Okay, maybe it's not really groveling that I'm after, but more of that acknowledgement of the events that led to the relationship ending. If you can't own up to what happened, then how do you learn from it? And that's what I loved about Evan and Kendall deciding to re-commit and give their relationship another shot--because they deserved it. Yes, the love was still there, but the trust was something that Evan had to earn once again considering that he walked away from her without a word of explanation. Aside from Evan and Kendall's story, the story arc regarding the Dodges comes to a head, and I wonder if Carrie Ann Ryan has any plans for a certain Dodge in the future, although I may be a tad more excited about the next Wilder Brothers book after that cliffhanger between the next couple! I'm giving Always the One for Me 4.5 stars.
--------------------------
Read my reviews for the Wilder Brothers series: