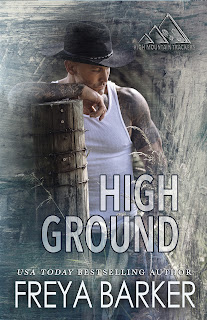 Note: An advance reader copy (ARC) was provided by the author via Buoni Amici Press.
If you've never read anything by Freya Barker, excuse me for saying, but what the heck is wrong with you?! Her writing is wonderfully addictive, with more mature characters that have intriguing stories to share. Barker's High Mountain Trackers series has easily become one of my favorites. Three books in and my interest for this group of men who use their smarts and skills to help locate and find missing people. High Ground is all about Fillippa Freling and Sullivan Eckhart, aka Pippa and Sully. If you aren't a weirdo and have actually read this awesome series, you'll remember what happened to Pippa in the second book, High Stakes, and how there seemed to be something starting between her and Sully. That being said, you can still read this new book as a standalone--but why do that when you can grab the first two novels and see how all the awesomeness began?
Forty-year-old Pippa Freling has high hopes that Montana is the place where she can plant new roots, but things having gone exactly as planned. At least her older sister, Nella, is nearby, and Pippa's finally getting her auto shop up and running. She's even managed to make a friend or two around town. Maybe someday soon, she'll be able to adopt the dog she's always wanted. That list doesn't necessarily include Sully Eckhart. The forty-four-year-old who is former military but now works at the High Meadow Ranch when he isn't off finding missing people with the rest of the High Mountain Trackers may pique her curiosity, but after their one night together and the way he's been avoiding her since, she's more than good to return the favor. But once Pippa is caught in the middle of a serial killer investigation, Sully won't hesitate to get up close...and even more personal.
Ah, Pippa and Sully were stubbornness personified, but I rooted for these two because they simply felt like they belonged together. They may have needed a bit of a nudge (one that I won't get into here, so you're just going to have to read the book!), but once they decided to give it a go, there wasn't a whole lot of unnecessary drama when it came to their relationship. Of course, with the romance comes the mystery and the suspense, and while I did have the eventual villain on my list of suspects, I confess that it took me a wee bit longer to figure everything out! Not that I'm complaining because I do love it when a romantic suspense author keeps me on my toes. We also have the rest of the recurring cast of characters out and about, but I do wonder if something may be on the horizon regarding something Jonas said. Either way, I thoroughly enjoyed High Ground. Five stars!
-------------------------
Read my reviews for the High Mountain Trackers series: