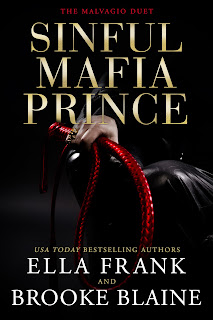 Note: An advance reader copy (ARC) was provided by the authors via Valentine PR.
Sinful Mafia Prince is the second book in the Malvagio duet from the writing duo of Ella Frank and Brooke Blaine. The first book, Forbidden Mafia Prince, must be read prior to this second one. Book two picks up where book one left off. Luca Davis has been taken by the Fiores, and saying that Domenico Rossetti was none too pleased would be understatement. Dom has been ordered by his father to leave the matter, essentially leaving Luca to go through whatever may be in store for him at the hands of his actual blood family. Going against his father's wishes would be tempting fate, but not having Luca is simply unthinkable as much as it is unbearable. With the war between the Rossettis and Fiores reaching a fever pitch, do Dom's and Luca's loyalties remain with their respective families or with the most unlikely ally they could ever have--each other?
Lust evolves into love in this conclusion to the Malvagio duet. The romance was sweeter and the sex was steamier as Luca and Dom make certain choices here. If you're a longtime reader of Ella Frank and Brooke Blaine, then you know that they don't necessarily skimp when it comes to heart and heat in their books. I liked seeing these main characters not only fall for each other but learn to trust one another, although this wasn't as difficult a feat as you would think considering their families were mortal enemies. Inasmuch as I enjoyed the lovey-dovey parts of the book, I must confess that I was hoping for more when it came to mafia aspect, especially given that it's right there in the title of both books. There were several plot points that were unresolved, leaving me scratching my head a bit. So, all things considered, I'm giving Sinful Mafia Prince 3.5 stars.
Release Date: 29 August 2022
Date Read: 27 August 2022
Learn more about Ella Frank and Brooke Blaine.
Pre-order Sinful Mafia Prince on Amazon.