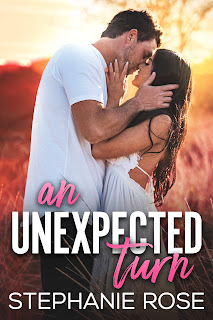 Note: An advance reader copy (ARC) was provided by the author via Enticing Journey Book Promotions.
A few months ago, I finally read Stephanie Rose's Just One Favor, and that novel became my absolute favorite among all of her books. Now, it looks like her latest standalone is giving that a run for its proverbial money. An Unexpected Turn is the story of Peyton Miller and Jake Russo. She's thirty-two and the new guidance counselor at the local high school in the small town she's just moved to. He's forty-six, a contractor with a successful business, and a single father to a fourteen-year-old son named Mike. Oh, and he also happens to be best friends with Keith McGrath, chief of police and Peyton's beloved uncle who is more of a father figure than her biological father. Peyton and Jake aren't strangers, but imagine his shock when the kid he used to know has grown from a girl into an adult who has not only become a pillar of support for his son but also a woman he can't stop thinking about. The pull to one another is something neither of them resist for long, but will it end up costing both of them far more than either of them can risk losing?
Goodness me, but how this book got to me in ways I never saw coming. I already know that Stephanie Rose is a gifted storyteller given that I've read quite a few of her books, but there was just something about Peyton and Jake's story that got to me. Maybe it was their romance, one that saw them taking the chance of a lifetime to be with the person they're heart belongs to. It could be seeing Jake's relationship with Mike flourish and Peyton'become a source of support and sounding board both for Mike and his peers. Then there are the supporting characters, with Jake's son, Mike, and Peyton's uncle and aunt, Keith and Maya, being the absolute standouts. Okay, it's basically a combination of everything I've mentioned and then some. The author took a story idea that could have been all about the forbidden aspect, and made it about love, family, friendship, and community. While An Unexpected Turn may not have dethroned Just One Favor as my favorite Stephanie Rose read, it most certainly sits quite prettily at second spot. Five stars!
Release Date: 12 August 2022
Date Read: 07 August 2022
Learn more about Stephanie Rose.
Purchase An Unexpected Turn on Amazon.