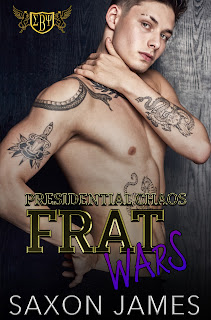 Note: An advance reader copy (ARC) was provided by the author via Foreword PR & Marketing.

"Mhmm." He nips my earlobe. "You're Chuck on the streets and my Charlie in the sheets."

I can't believe this series is actually done already! I've enjoyed the heck out of these two rival fraternities and how some of their members find love with the unlikeliest of partners. The third and final book is Frat Wars: Presidential Chaos, and as the title may have probably clued you in, this one is about the presidents of the two frats. Zeke Ariston and Charles Levine are college seniors and outgoing presidents of their fraternities, Sigma Beta Psi and Rho Kappa Tau, respectively. Things are transitioning from the present to the future, with responsibilities slowly being handed over to those who are next in line while also making a harder press towards what awaits them both post-graduation. But it looks like someone's making some heinous accusations against the Sigmas, and Zeke wonders if Charles is an obvious suspect, a potential ally, or even more?
Dare I say that Saxon James may have actually saved the best Frat Wars book for last? And that's saying something (well, something more) since I quite loved the first two books, King of Thieves and Master of Mayhem, in the series. The title of the book may have made it obvious who the story was going to be about and the blurb did hint at what awaited readers between the proverbial covers, but everything about Presidential Chaos surpassed every single one of my expectations. As if the tension between Zeke and Charlie (squee!) wasn't enough, there was an air of mystery to this series ender. Figuring out who was spreading the rumors about the Sigmas and what was motivating them was part of what made this a more enticing read than I already thought it would be. Plus that epilogue was EVERYTHING! Gah! I absolutely cannot keep my adoration for Presidential Chaos (or the series as a whole) all hush-hush. Le sigh. I'm giving this one five-plus stars.
-------------------------
Read my reviews for the Frat Wars series: