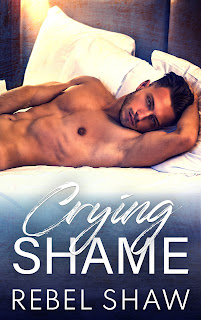 Note: An advance reader copy (ARC) was provided by the authors via Give Me Books Promotions.
Crying Shame is a single-parent, falling-for-your-best-friend's-sibling romance from the writing duo of Rebel Shaw, aka Lacey Black and Kaylee Ryan. This is a complete standalone, and it's about Graham Morgan and Addyson Sinclair, plus her son, Noah. Graham is thirty-four and works as a pharmacist in the family-owned pharmacy; Addyson is thirty and is a first grade teacher at the same school where here five-year-old on is about to start kindergarten. Graham has been best friends with Addyson's brother, Adam, for many years, so he and Addy have forged their own friendship as well. When Addy and Noah are forced to move out of their apartment for an extended period of time, Graham surprises them--and himself--when he offers they stay with him since he lives in the same school district. Being in the same space brings them closer, and the crush Addy once had isn't just coming back to life--it looks like Graham has feelings, not just for her, but for her son, too. She's hesitant about risking both her heart and Noah's, but Graham is prepared to show Addy that he's all in because doing otherwise would be a crying shame.
I absolutely loved everything about this book! This wasn't just Graham and Addyson's story; they shared it with Addy's son, Noah, and not merely because of who his mother was. Graham adored him as a completely separate individual, and seeing these two forge such a beautiful relationship made my heart happy. Then there was Graham and Addy's romance, and while the feelings between these two were clearly strong, they were faced with a couple of complications. I understood and empathized where Addy was coming from, and I appreciated how she always put Noah first. Of course, there was also Graham's reputation for not being all that into commitment, but then, Addy wasn't like any of the other women Graham had been with. I will say, though, that I quite liked the fact that there wasn't any sort of prolonged drama when it came to Adam, Addy's brother and Graham's best friend. Been there, done that, so hooray for not going down that well-worn road, Rebel Shaw! I swooned, I smiled, and now, I'm giving Crying Shame five stars.
Release Date: 30 August 2022
Date Read: 29 August  2022
Learn more about Rebel Shaw.
Pre-order Crying Shame on Amazon | Apple Books | B&N | Kobo.