Review: Mine to Hold by Natasha Madison (Southern Weddings #2) 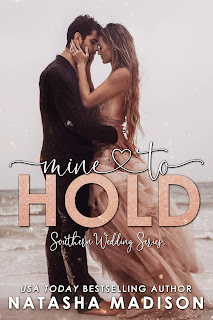 Note: An advance reader copy (ARC) was provided by the author via Wildfire Marketing.
Mine to Hold is the second novel in Natasha Madison's Southern Weddings (or Southern Wedding--not entirely sure since some site have it as a singular form and others have the plural one) series. The Baker siblings appear to have another #WeddingFail as the next one in the brood walks down the aisle, but not as a blushing bride. When Shelby Baker unexpectedly finds an email from her groom, she's touched, but the more she reads, the more she notices one undeniable fact--the email was meant for someone else. That someone else? Her best friend, Ace's, girlfriend--the same one he was planning to propose to. With both Shelby and Ace reeling from what happened, she decides to invite him on what was supposed to be her honeymoon. What could be better than some sun, surf, and serenity with your best friend? Maybe the realization you want much more with them?
Shelby and Ace's story was very much a friends-to-lovers romance, and goodness, but how my heart went out to them when they discovered what had been going behind both their backs. Ace, who I never really thought of as Weston (and whose last name I don't recall being mentioned, and gah, I just have a thing about main characters having surnames!), was such a sweetheart. There wasn't a single thing about the guy that I could fault. He loved Shelby and was both loyal and trustworthy. As for Shelby, I totally got why she was the way she was once she and Ace came back from their life-changing not-honeymoon. While things may seem to have progressed quickly between our main characters, it also felt like theirs was a long time coming, and by the time we get to their happily-ever-after, it was obvious that they were meant to be. 4.5 stars for Mine to Hold.
------------------------
Read my reviews for the Southern Weddings series: