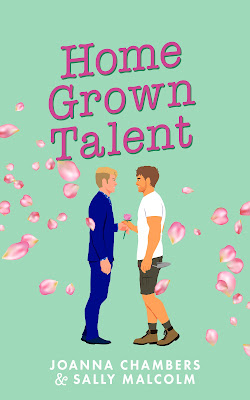 Home Grown Talent
(Creative Types #2)
by Joanna Chambers & Sally Malcolm
Date Released: August 25, 2022
About Home Grown Talent
Are you for real?
From the outside, it looks like model and influencer Mason Nash has it all—beauty, fame, and fortune. With his star rapidly rising, and a big contract up for grabs, Mason’s on the verge of hitting the big time.
When an opportunity arises to co-host a gardening slot on daytime TV with his ex’s brother, Owen Hunter, Mason is definitely on-board. And he intends to use every trick in the book to make the show a hit—including agreeing to his ruthless producer’s demand to fake a ‘will-they/won’t-they’ romance with his co-host…
Owen Hunter is a gardener with a huge heart and both feet planted firmly on the well-tilled ground. He’s proud of the life he’s built and has absolutely no desire to be on TV—yet somehow he finds himself agreeing to do the show.
It’s definitely not because he’s interested in Mason Nash. The guy might be beautiful—and yeah, his spoiled brat routine presses all Owen’s buttons in the bedroom—but Owen has no interest in a short-term fling with a fame-hungry model.
As the two men get closer, though, Owen starts to believe there’s more to Mason than his beautiful appearance and carefully-curated online persona—that beneath the glitz and glamour is a sweet, sensitive man longing to be loved.
A man Owen might be falling for. A man who might even feel the same.
But in a world of media spin and half-truths, Owen is dangerously out of his depth. And when a ridiculous scandal explodes online, with Owen at its heart, it starts to look as though everything he thought was real is built on lies—including his budding romance with Mason… 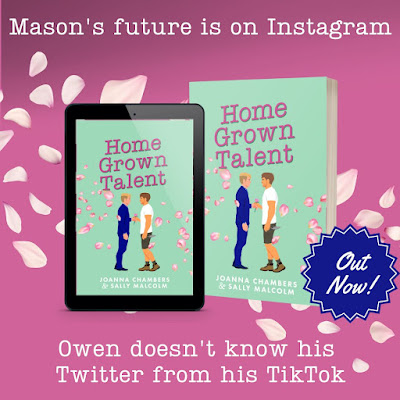 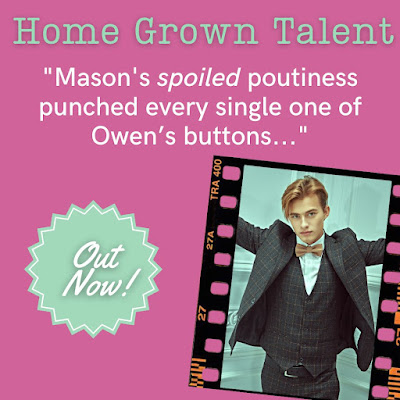 An Excerpt from Home Grown Talent
Owen was hard-pruning the clematis that swarmed up the back wall of his garden when his doorbell rang. He knew immediately it was Lewis, his younger brother—no one else rang his doorbell so obnoxiously.
Owen’s doorbell was a cheery little two-note bell. A proper little ding-dong of a bell. But Lewis had a way of leaning on it that made the dings run into the dongs and start to stutter, until it seemed like the whole contraption was having a nervous breakdown.
Which was… very Lewis. He had that effect on a lot of people too.
Owen unhurriedly closed his secateurs, crossed the garden, and went inside the house to answer the door. Sure enough, on the other side stood Lewis, and with him was Aaron, his boyfriend of the last few months.
“Could you not break my doorbell?” Owen asked mildly, stepping aside and waving them in.
“You were taking ages,” Lewis said unapologetically, as he moved past him.
“I was in the garden.”
“You’re always in the garden.”
Aaron flashed his cute smile at Owen as he stepped into the house and held up a be-ribboned cardboard box. “I brought cake.”
Owen grinned. “See, this is why I like you more than Lewis.”
“I heard that,” Lewis called from halfway down the hallway, but he sounded a little bit pleased. The soppy sod.
Owen followed them down the hallway to the back of the house. When he’d bought the place, he’d knocked through a couple of walls to make one big kitchen and living area, adding some wide glass doors at the back that let in tons of natural light and gave him a nice view of his pride and joy: the garden.
“So, to what do I owe this pleasure?” he asked. “I wasn’t expecting you today.”
“Oh, just popping by on the off-chance you’d be in,” Lewis said airily, which made Owen immediately suspicious, particularly given that Owen could now see that the cake box Aaron was holding looked very fancy indeed, with gold lettering and gold and blue ribbons.
“Any chance of a cuppa?” Lewis asked.
“Sure. Tea or coffee?”
“Hot chocolate?” Lewis said hopefully.
“Hot chocolate and cake?” Owen said, raising his brows. “You want to go into a sugar coma?”
“Can’t think of a better way to die.”
“Yeah, well, I don’t have any hot chocolate, so pick a grown-up beverage.” 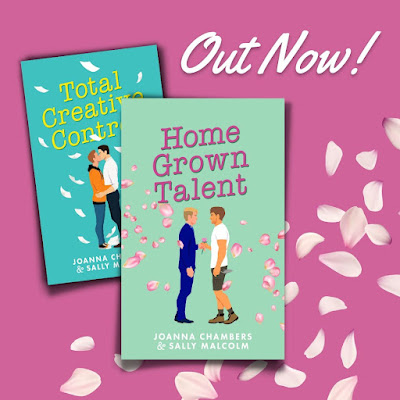 Joanna Chambers has a day job and family but manages to find time to write by not cleaning the house or watching television. She is shockingly ill-informed about popular culture.
You can find her on Twitter being distracted, on Instagram (occasionally) being confused, and – most happily – in her FB group, Joanna’s Chamber, talking about reading and random stuff with her reader pals.
*  *  * 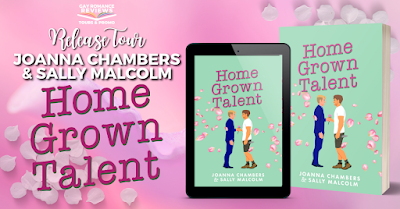