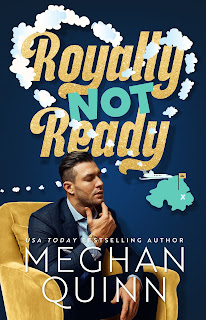 Note: An advance reader copy (ARC) was provided by the author.
Get ready, fellow romance readers, because Meghan Quinn's newest release is a royal romance! Royally Not Ready is the story of Lilly Campbell, a twenty-seven-year-old co-owner of the Splash Wagon from Miami who has absolutely no clue that she's a member of European royalty. When a hot guy in a suit with an equally hot British accent shows up in the middle of a wet t-shirt contest informing her that she was a princess wash shocking to say the least. Add to that the fact that she's been deemed the next in line after King Theodore, who just happens to be her maternal grandfather. Thirty-two-year-old Keller Fitzwilliam may have been tasked to come fetch her and bring her to some place called Torskethorpe, but he doesn't have to be a grump about it. It turns out, though, that he's also supposed to train her in all things royal, especially as the heir apparent. It's Keller's duty to prepare Lilly for everything to come, except he hasn't prepared her to fall for him.
This was a royal romance with a creative twist, and with so many books falling under this trope, it was nice to have that bit of something to make the story and characters stand out. Lilly was an absolute standout main character. She truly was the heart of this story, and I thoroughly enjoyed seeing her go from bikini store on wheels co-owner to princess while she still remained true to who she was at her core. I liked the connection she shared with Keller, and she being that bit of sunshine that helped him thaw out that icy heart of his made for a great romance as much as the whole princess-in-training aspect was entertaining. All in all, Royally Not Ready had that trademark humor mixed with some swoony romance that Meghan Quinn is known for, and I'm handing this four stars.
Release Date: 09 August 2022
Date Read: 07 August 2022
Learn more about Meghan Quinn.
Pre-order Royally Not Ready on Amazon.