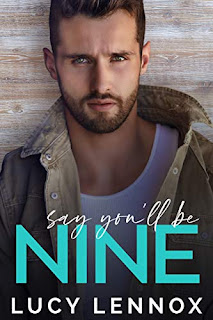 He leaned his forehead on my chest. “God dammit. Stop being such a good fucking person. You make other people look back. Asshole.”

I laughed and kissed the top of his head. “Sorry. I'll try to be a shittier person next time.”

Gaaaaah! This book was just...le sigh. Say You'll Be Nine is a falling-for-your-best-friend's-sibling but to a whole new level of awesomeness thanks to Lucy Lennox's fabulous writing and the whole forced proximity angle with a home improvement slash social media influencer twist. This is a complete standalone so you don't have to worry if you're new to Lennox and have yet to read any of her much-loved and well-known series. Here we have twenty-four-year-old Isaac Winshed, better known as Nine. You'd think he got the nickname for the simple reason that he was the ninth of ten children, but there was more to it than that. You see, Nine didn't see himself as anyone special in a family where distinctions were made when it came to the ten siblings. His YouTube channel focusing on do-it-yourself videos, however, was solely his. When a potential sponsor approaches him, it's huge, but it comes with one requirement: that it have an LGBT angle to it. Nine's older brother, Eli, comes with the perfect solution: bring in his best friend, Cooper Heath. Not only is Cooper openly gay, but the twenty-nine-year-old aspiring actor badly needs the payout to help his twin brother, Jackson, with a life-saving transplant. The problem? Nine and Cooper can't stand one another, so how are they supposed to pretend to be a couple, especially since Nine isn't gay. Right?

Goodness, but how I adored this story and these main characters! This was such an easy, breezy read, one that had me smiling most of the time, but there were also distinct moments that pinged at my heart, particularly, when it came to how Nine didn't see himself as anyone special and when Cooper was by his brother's bedside. I'd be hard-pressed to choose who between the two of them I related to more because there were aspects to both their personalities and circumstances that I empathized with and also saw within myself. I loved that this was a story about love for self and for family as much as it was about the romantic sort of love between Nine and Cooper. These two had such different personalities, but they also shared certain similarities, especially when it came to love of and selflessness for family and the pursuit of their dreams. Absolute bonus points go to Nacho, Nine's Labrador retriever, who was a significant part of the life these two created for themselves. Notable supporting characters included Eli, Jacks (who gets his own sweet short story, Jacks and Marchie, which you can snag for free via the author's newsletter), Cooper's mom, and Nine's dad. After what's been a disheartening few days in the news, Say You'll Be Nine may very well be the perfect pick-me-up for fans of M/M romance like me. Five-plus stars. ♥