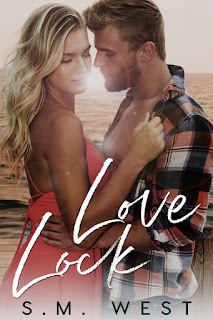 Love Lock is the conclusion to S.M. West's duet of the same name and wraps up the love story of Pippa Raine and Drew Hayes. This does NOT pick up immediately after the events in the first book, nor does it pick up a year or so after them. Nope, this picks up several YEARS after what was pretty much a seemingly happy ending in book one. Explanations as to what caused problems between the main characters come along later in the story, but basically, Pippa and Drew did break up, with a lot of it due to her older brother Finn--aka Drew's best friend--and his lack of acceptance and support of their relationship. She goes on to meet and marry a professional football player while Drew...well...he goes on to realize the error of his ways, but you know what they say--too little, too late. Sure, he's managed to retain Finn's friendship, but if he thought breaking up with Pippa would mend fences between the siblings, he was sorely mistaken. Life goes on, but Drew still loves Pippa and Pippa's marriage isn't exactly the fairy tale it looks to be. Even if Drew gets a second shot at Pippa, could she even risk trusting him with her heart again?

A quick note: The books in this duet MUST be read in order--i.e. Love Block first, followed by Love Lock. That being said, I was pretty surprised by the fact that the beginning of book two had no connection to the ending of book one, to the point that I had to re-read the last couple of pages of the first book just to make sure I hadn't missed anything and then check the very beginning of the second book to see if there was some clue as to what had happened. But yeah, there's a five-year gap between the two books, and it took me a good, long while before I stopped shaking my head at both Drew and Finn for their less than stellar behavior. Would I sound really bitchy if I said that I was glad that Drew had to work to regain Pippa's trust? Because seriously, a main character who forgives and forgets at the drop of a hat without barely any effort on the ex who wants a second chance is a personal pet peeve of mine. After all, they do say that anything worth having is worth fighting or working for. This was an angsty read, but it does give readers of the duet the happily-ever-after they're looking for. I'm giving Love Lock four stars. ♥

Read my reviews for the Love Lock series: