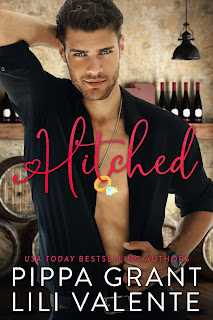 “Baby, I'm never going to leave you. Haven't you realized that by now? Whether we're friends, enemies, lovers, or a mix of all three, I'm going to keep coming back for more. I can't stay away from you. Even when I try.”


Three books in and my absolute adoration for the writing duo that is Pippa Grant and Lili Valente has been cemented! I've enjoyed reading these two authors when it comes to their solo releases, but ever since I started reading their Happy Cat series, I've been hooked and as happy as a fat cat with a lifetime supply of some heavy-duty, fattening, lip-smackingly yummy cream. Or as happy as a puppy with a never-ending supply of steak-flavored treats. Or as happy as me with as much as bacon as I want for the rest of my life without gaining a single pound. You get the picture. From the quirky array of animals with their adorable names to the actual offbeat townsfolk, these books were the quintessential romantic comedies that made me both all giddy and giggly from start to finish.

Hitched is the third novel in Happy Cat series and features Blake O'Dell and Hope St. Claire. Their story has an enemies-to-lovers slash fake-spouse feel to it but with a twist! You see, Blake and Hope were actually once married, about four or so years ago, but was annulled upon Hope's insistence twenty-four hours later. Since then, there's been a whole lot of hate being thrown from both sides, so when Blake gets a call from Hope to meet her outside the courthouse, he's taken aback to find her in a wedding gown and with a proposal that isn't all that romantic either: they get married immediately so that she can lay claim on her late grandmother's estate, particularly, Chewpaca the alpaca. Marrying the woman who broke his heart once is a bad idea, but convincing her that they belong together and should stay married may not be all bad. Time for Operation: Real Romance to begin!

A woman more comfortable loving animals than people, a man who believes in love and marriage, an alpaca  (not a llama!) named Chewpaca, plus a bunch of feral cats, gossipy townspeople, teasing family members, and a seemingly not-so-nefarious PI make for one hell of an interesting cast of characters in Pippa Grant and Lili Valente's third Happy Cat novel. I loved that Blake and Hope finally got their chance to get things right this time around, and I guess we have Hope's late grandmother and her jerk of a cousin to thank for that. There are appearances, of course, from Blake's brothers and those with significant others. We even get a glimpse of who Clint, the youngest among the brothers and, by the end of the book, the only single one left, may be paired up with when his turn comes around. Each book can be read as a standalone, but because I'm rather addicted to all things Happy Cat, I'm going to eagerly recommend--aka heavily push--the first two books as well as Hitched, which snags five-plus stars. ♥

Read my reviews for the Happy Cat series: