Review: A Crown of Iron & Silver by Hailey Turner (Soulbound #3) 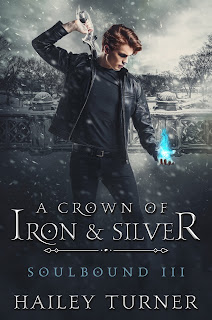 Jono thought of the accidents and decisions that had led them to each other, and the way nothing in their lives seemed to happen by chance, but by what the Fates decreed. Maybe they could've fought going down this twisted path, but Jono knew they couldn't win against gods. What was important was they were each other's in all the ways that mattered—lover, partner, weapon. It was enough.

Patrick would always be enough.


Could this series get any better?! Hailey Turner raises the bar with each new book she releases in her Soulbound urban fantasy series, and that's quite a feat considering there are no guarantees that a series maintains or even surpasses the bar it sets for itself with every new installment. A Crown of Iron & Silver is the third novel in the series, and Turner has taken this story and made it not just about the main characters but about the world that the cast of characters live in. As always, Turner has outdone herself here, with even more revelations and twisty turns.

All Special Agent Patrick Collins wanted was to enjoy the upcoming holidays and a reunion with his old team, that is, until he's assigned to investigate a human child who's gone missing and its replacement changeling leading a witch family to seek justice from the fae. To complicate matters, Jonathon de Vere's decision to declared his own god pack requires forming an alliance with the fae, which is rather risky, but helping them find the recently abducted Summer Lady could be the impetus they need. That is, if they survive what awaits them beyond the veil.

If I had to choose what I loved most about this book, I'd be torn between how Hailey Turner has my imagination going into overdrive as I picture everything that happens from cover to cover and how far Patrick and Jono have come in their relationship. Turner excels in world building and her creativity and originality don't stop there, thanks to the enthralling story she has to tell here. From where Patrick and Jono were in the series starter to where they are now in this third book makes my heart happy. FYI, A Crown of Iron & Silver is NOT a standalone. Five-plus stars! ♥

Read my reviews for the Soulbound series:

All Souls Near & Nigh (book two) - five-plus stars - My Review

Purchase A Crown of Iron & Silver on Amazon.