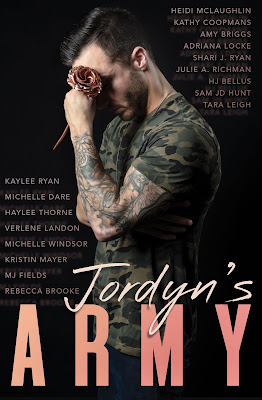 
About Jordyn's Army
Jordyn's Army is a charity anthology for Jordyn Preston (daughter of author Beverly Preston) and her fight against cancer.

EVERY SINGLE PENNY, not profits, but ALL money from this project will go to the Preston family.

This beautiful book (electronic, hard & paperback) will only be available for 30 days so don't wait⁠—order yours today.

In the hardback, you will see, exclusive to the anthology, artwork painted by Jordyn, in full color.

The new stories you'll find in Jordyn's Army:
Fighting for Our Forever… Baby Style by Heidi McLaughlin
The Beaumont Gang comes together for the birth of Ajay and Whiskey’s son.

Pure Rose by Kathy Coopmans
Meet Rose and Owen in this short sexy story about two single parents in their forties.

Waking Up to Forever by Amy Briggs
What happened when Snow White woke up to her Prince Charming?

When Jaqueline White awoke from a coma, the result of a poisoned apple, her doctor Jacob McIntyre, was by her side. They’d never met, but it was fate that drew them together when he saved her life.

Now, one year later and days away from their wedding, disasters begin to strike in tandem, threatening to ruin the entire day.  Jacob and Jackie work tirelessly to put out one fire after another, wondering if these catastrophes and mishaps are a sign from the universe that perhaps they aren't meant to be after all.

Does true love really conquer all or are curses just not meant to be broken?

She just wants clean pajamas so she can go back home, flop on the couch, and relax.

As the spin cycle begins, in walks the most delectable man she’s ever seen—one that clearly doesn’t belong in her small town.

She doesn’t belong in his bed, either, but a simple little crush never hurt anyone.

Love, Rose by Shari J. Ryan
I didn’t want Frankie back. I didn’t want him to stay, but I wanted him to know how much I loved him, why I loved him, and what I would have done to make him happy. Through letter after letter, I poured my heart and soul onto paper and mailed them.

The letters never made it to Frankie. Frankie moved away, but a new man moved into his old place. His name was Colton, and he was the one who received all my letters.

When Colton wrote back, he told me my words changed his life. He wanted to meet me.

I didn’t know that meeting Colton would also change my life.

There are just some nights you’ll never forget...

Coming Home by HJ Bellus
The My Way Gang is back together.

Annie has news to break to her dad, Cree.

Life on the farm will never be the same.

Roses for Rachel by Sam JD Hunt
Major Jonah “Whaler” Jones is at rock bottom. After losing his wife in a tragic accident that he’ll never forgive himself for, the once elite fighter pilot is ready to end it all. But one sweltering Vegas morning, a voice from beyond changes the trajectory of his life.

On a hungover quest to fulfill his dead wife’s request, he stumbles upon Hannah Green. A struggling widow, Hannah fills her days crafting copper roses. Although he vowed to never love again, Jonah knows that his beloved Rachel came to him that morning with a purpose; and that purpose was Hannah.

Finley and Sebastián by Tara Leigh
It’s a steamy summer in New York City,
and the newest couple in the Wages of Sin
series is burning up the pages.

With Aislinn and Damon away,
Finley and Sebastián will play.

Whiskey & Roses by Kaylee Ryan
You met Rhett and Saylor in Hey, Whiskey.

My outlook on life has changed in the last fifteen years. I now have a husband and a family I can lean on. I’ve paved my own path, but they’ve traveled it with me.

Not a single day have I regretted my choice to make this small town in West Virginia my home. We’ve built a life here and raised our kids here.

Now here we are fifteen years later, and I’m about to show my wife that even after all these years, she’s all I see.

Where I Escape by Michelle Dare
You never know where your life will lead. Mine led me to a man who abused me. Who hurt me. Who destroyed everything I was. I never thought I’d be whole again.

Love is something my friends have, not me. I thought it was unattainable. Until I met Finn.

He knows of my past. He’s held me through my nightmares. I’ve never met someone so kind and patient.

Where I escape is into the arms of Finn where everything in my world finally feels right again.

Buckle up and prepare for takeoff as Griffin Harrison and Chloe Adams find themselves encountering more than turbulence on their way to New York City.  Make sure your tray tables are locked and in their upright position, cause things are gonna get bumpy.

LINE 39 by Verlene Landon
Lena gave up on life and abandoned her dreams of a happily-ever-after when a freak accident took her eye, most of her vision, and left her scarred. Her only reason for living now is to make her terminally-ill father believe otherwise.

Rue is blinded by the beauty of Casterton’s newest resident, but he can’t work up the nerve to approach her. Sadly, he notices her leaving Carol’s every week with a bouquet of flowers from someone who obviously has the courage he lacks.

Lucky for them, a happy-go-lucky golden retriever puppy helps them both to see what’s right in front of their faces.

Mine to Protect by Kristin Mayer
Austin and Scarlette come together in a story that will keep you on the edge of your seat to the very end.

The Way We Fell by MJ Fields
Ben and Kendall, Part One
(Brand new part of the Legacy world)

One brilliant smile, and my heart beat for what felt like the very first time.
One night as he held my sister and sang to her, it broke.

Years later, his smile is different, and I curse my heart when it beats in an all too familiar way, a way it’s only ever beat for him... again.

He was once hers, could he ever truly be mine?

Ring Me by Rebecca Brooke
I am not a bully.

At least not anymore. I’d learned my lesson even before I had all my dreams ripped away.

Then I saw her. I knew I wanted her to be mine.

I made so many mistakes, but she let me in and gave me her heart.

Now I want to keep it forever.

How do I ask the woman of my dreams to spend the rest of her life with me? Simple, just ask.

At least I thought it would be that easy.

About Jordyn Preston
For those who don't know, Jordyn Preston is a nineteen-year-old Las Vegas native where she lives with her family and two golden retrievers. When she's not kicking cancer's ass, you'll find her volunteering at her favorite dog training facility, creating art from copper or the stroke of a paintbrush. She also enjoys cooking and sewing.

In June 2015, Jordyn was diagnosed with a very rare liver cancer and received a full liver transplant on September 3, 2015. She remained cancer-free for almost two years, before being re-diagnosed in August 2017, one week into her senior year of high school.

Through cancer, Jordyn found a new love, speaking in public. She shares her story and scars in hopes of inspiring others. Jordyn also acts as an Ambassador for the Make A Wish Foundation.

With the help of Jordyn and her mom, Beverly Preston, the authors have been able to bring Jordyn's Army to you.