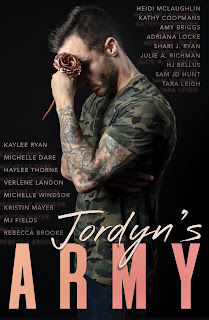 Note: An advanced reader copy (ARC) was provided by the authors via Buoni Amici Press.

Crush by Adriana Locke, Finley and Sebastián by Tara Leigh, and Ring Me by Rebecca Brooke were my top three favorite short stories in the collection, each one garnering five stars. Crush is part of Locke's Gibson Boys series, with Delaney (whose last name wasn't mentioned here nor do I remember it from the previous books) and Boone Mason. I quite liked where this story went, with the sort of ending that was happy but made none of the usual promises. Finley and Sebastián features Finley Byrne and Sebastián Cruz, who were supporting characters in Leigh's Wages of Sin series. This was tension-filled in the best ways possible, and left me wanting more from this fiery twosome. Ring Me is like the cherry on top of Brooke's Jaded Ivory series, as well as an extended epilogue for Mari Cossman and Cole Wallace from Rock Me. This was sweet, hot, and so le-sigh worthy and made me grin like a loon.

Reunion by Julie A. Richman and Love, Rose by Shari J. Ryan each get 4.5 stars, with both these stories going in directions that were wholly different from where I thought they were going, and I love it when an author does that. Richman's Reunion is the story of Rose who finds herself grudgingly agreeing to attend her high school reunion alongside her pregnant best friend. I don't want to give away the rest of the story, but let me just say that what Rose was most apprehensive about was coming face to face with her ex who ghosted her years ago. Then there's Ryan's Love, Rose, which finds Rose Cameron discovering her husband's been cheating on her and decides to move from Connecticut to London to start over. There, she begins to write hate letters to her ex as a means of therapy. As with Reunion, I don't want to give too much away, but I do have a thing for stories with writing letters.

Coming Home by HJ Bellus, Whiskey & Roses by Kaylee Ryan, and Mine to Protect by Kristin Mayer were all good reads and I ended up giving these four stars each. Bellus's Coming Home serves as a prequel to what could be a spin-off of the author's My Way series, and certainly had my curiosity piqued enough that I've now added those books--as well as a couple of other standalone books from the author--to my to-be-read list. Ryan's Whiskey & Roses is a story that takes place after the author's Hey, Whiskey novel, which I have yet to read. It did take me a while for the name of one particular child and the parents' nickname for him to click that they were speaking about the same child. SMH! Mayer is the lone new-to-me author and her Mine to Protect story felt like it was connected to a previous story she's published, so while it was good, I did feel like I was missing some information.