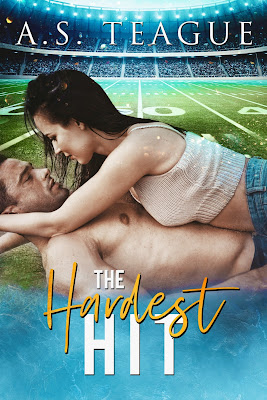 About The Hardest Hit
My friends used to tell me ‘What happens in Vegas stays in Vegas.’ Clearly they lied, because there was no way the chemistry I had with Mel could ever be left behind.

However, my children, her career, and nine hundred miles between us meant that for seven years, Melanie Holstein was the one who got away.

I was Aiden Shaw, first-round draft pick turned the best quarterback the league had ever seen. I worked hard to secure my position in football history while balancing life as a single dad. Through it all, my Vegas spitfire was never far from my mind.

And considering her best friend was now with my best friend, it was pure and utter torture.

When my career took a devastating turn, Mel was the first person at my side. I was broken and defeated, but that stubborn woman was determined to piece me back together.

I liked to pretend Mel and I were destined for greatness, but Lady Luck had never been on our side. And the tragedy that followed might have been the hardest hit of all. 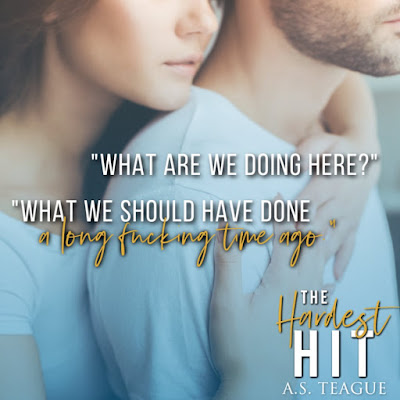 Read my five-plus-starred review of The Hardest Hit.

Add The Hardest Hit on Goodreads. 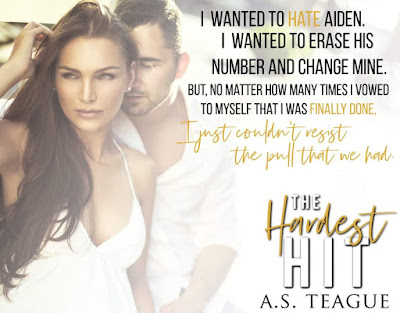 An Excerpt from The Hardest Hit
“Fine. I won’t argue anymore.” Brooke finally relented to letting me loan her more money so that we didn’t have to leave so early.

But suddenly, leaving didn’t sound like such a bad idea.

My face split into a grin, and I swayed toward her, whispering, “That’s my girl. Now, don’t be obvious, but there is a fuckin hottie at the table across from us who has been eyeing you since we sat down.”

I didn’t mention that I only knew he’d been eyeing her because I’d been having some serious visual foreplay with his buddy.

Brooke looked to the craps table where five men were cheering every time their numbers hit, clapping each other on the back and whooping. Her jaw dropped and I giggled.

After a full thirty seconds of her staring open-mouthed across the smoky area, she blinked and I hissed, “Yessssss.”

“Pshhhh.” I elbowed her and glanced back over to where both men had stopped what they were doing and were watching us almost expectantly. “That’s all you, girl. The guy beside him is a different story. Mister Dreamy over there, though, only has eyes for Brooke.”

I couldn’t stop the sharp burst of laughter that erupted from my lips, and she grabbed her wine glass and drained it in one swallow.

I grabbed my own and followed her lead. Game on!

“Shit, I think I just had an out-of-body experience,” she whispered.

I scooped up my pile of chips and dumped them into my clutch. “Hopefully, you’ll have another one later tonight. Let’s go talk to them.”

I gave her a gentle shove and she teetered on her heels, careening right into the back of the guy who had been watching her. And when he turned, I knew that my work there was done.

It was time to go take care of my own business.

“See something you like?” I asked, stopping in front of my date for the evening, whether he knew it or not.

He leaned in close and whispered in my ear, “I’ve never seen anything so breathtaking in my life.”

I tipped my head back to look at him, a response frozen in my throat.

The side of his mouth hitched as he stared down at me, his thick lashes giving a spectacular show.

I braced for what he was going to say next. Sexy as he was, I still needed him to have a personality, or it would never work… not even for a one-night stand.

He wedged a hand in the pocket of his jeans and murmured, “That took you long enough. I was worried I’d lost my charm and I was going to have to summon a smoke signal in order to ask you out.”

My brows shot up and a smile curled my lips. “Walking over to me probably would have been easier.”

“Maybe. But then I would have missed the view of those sexy legs as they carried you over here.” He leaned in close. Not touching me physically, but his proximity was a tangible caress of its own. “Trust me when I tell you, it was well worth the wait.”

My breath hitched as he leaned away, that seductive grin still firmly in place.

Whoever the hell you want me to be.

“Mel. Er… Melanie. Whatever. I answer to both.”

He nodded, his gaze dropping to my mouth. “Nice to meet you, Mel.”

That was the exact moment I realized that I’d been wrong. It wasn’t Lady Luck who had been on my side. For the way my entire body was heating, this man had to have been the work of the devil himself.

And I was completely okay with that. 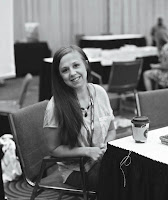 A.S. Teague enjoys the warmth of South Carolina with her husband and two daughters. The stereotypes about peach cobbler and sweet tea are not overstated. After years in the medical field, she is now enjoying every minute of being a stay-at-home mom. She loves wine, the beach, wine on the beach, and crying at Disney movies. When she doesn't have a book in her hand, she can be found pestering her husband with pictures of animals she wants to rescue, as well as debating whether to exercise or take a nap.