Review: Inside Out by Aimee Nicole Walker (Road to Blissville #6) 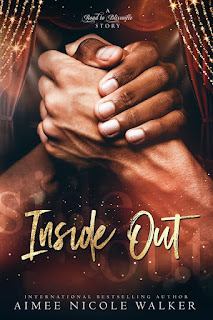 I adore Aimee Nicole Walker's writing, so whenever she has something new that's been published, there's simply no way I can resist reading it, as was the case with Inside Out, the sixth novel in the author's popular Road to Blissville series, a spin-off of her Curl Up and Dye Mysteries collection. This latest addition had a different feel to it, with far fewer characters who were featured in the earlier books making an appearance here. With a forty-five-year-old and a twenty-eight-year-old as the main characters, this one had the whole May-December thing going.

Romeo Bradley's move to the small town of Blissville was his fresh start. After having lost his life partner seven years prior, Rome's decision to accept the position of superintendent for the town's schools was proving to be the right one. Now, if only he could figure out some way to get the new chemistry teacher slash tennis coach to give him more than the cold shoulder, life would be better. It's not that Julius Shepherd isn't as drawn to the man; he is, but he's also hesitant. When an upcoming inspiring school play brings them together, could it be the start of more?

I loved that these two main characters were educators and their interactions with the students had me missing my years of teaching. While they may have had a seventeen-year age difference between them, they weren't really as different as you'd think, and whatever differences may have existed were easily bridged because these two actually communicated, a rarity nowadays in romance novels that use miscommunication as the main source of conflict time and again. Rome and Jules were mature guys with a serious side balanced out with a lighter, more fun side.

This book came SO close to getting a five-plus-star rating--it would have been the first for this series as far as my ratings go--but what stopped me was Rome's recounting of his relationship with his late partner, Peter, and how the one thing they couldn't agree on would have ended up with them going their separate ways had Peter been alive. I don't know why, but I was a wee bit disappointed with that scenario. Rome could have still found love with Jules even if his relationship with Peter didn't have that one issue. But hey, I respect the direction the author took.

My favorite thing about this book had to do with the play that three students had written the script and songs for, and how it became the catalyst for Rome and Jules getting together and there being an expose of sorts on the homophobia that was lingering in Blissville. Another favorite had to do with Rome's friendship with two older characters: Howie and Priscilla. Oh, and let's not forget Dolly! Plus Rome's and Jules's families AND Rome's friends. Simply put, I loved everything about Inside Out and I can't wait for our next visit to Blissville. This garners five stars. ♥

Purchase Inside Out on Amazon.