Review: Grace Between Mercy by S. Ferguson (In Between #3) 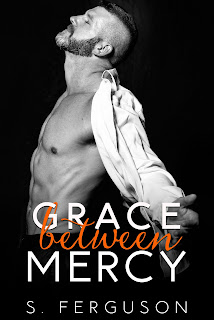 S. Ferguson's Grace Between Mercy has been one of my more anticipated reads, thanks to the good start that Something There in Between had and an even better follow-up in Between the Secrets. While I know that each book is touted as a standalone, I'm going to highly recommend that they be read in order. There are recurring peripheral characters as well as a story arc that does play out throughout the series. Bree Sutton and Declan James are in book one, Greg Bissen and Jake James in book two, and Ron Wolfe and Kella (whose last name I don't recall being mentioned) are in book three. Bree is the daughter of Ron and Declan and Jake are brothers and Bree's ex is the main character in book four. So, you can see why I'm suggesting the books be read in order, but it's up to you.

Grace Between Mercy picks up immediately after the epilogue in the second novel. Twenty-year-old Kella finds herself face to face with none other than forty-something Ron Wolfe, whose reputation as the leader of his own crew and influential figure in the city is well-earned. Ron needs someone as prolific a killer as Kella. His enemies won't see her coming, not when all they think she may be is his latest side piece. But while Ron trusts Kella to have his back, can Kella say the same about him? Life in foster care has made it difficult for her to trust anyone, relying only on herself. She is her own heroine because she's learned the hard way that no one's going to swoop in and rescue her. Neither of them was prepared for the undeniable draw they have towards each other. The attraction exists is one that their enemies could use against them but it could also be the best thing to ever happen to them.

This was a May-December love story with a healthy dose of action and suspense (and quite a bit of bloodshed) thrown in. I've always liked Ron, finding him to be a very intriguing peripheral character in the first two books, thanks to his being both a protective father to Bree and the rest of his crew and a man with no qualms when it comes to killing. His being paired with someone his daughter's age was an interesting touch, but thankfully, it wasn't made into this overly big deal throughout the story, with the author focusing instead on how their would-be romance affected their going after their enemies and vice-versa. I liked how Ferguson also highlighted Kella's innocence that remained amidst everything that she's done and experienced. A couple of things that did niggle at me was the angle regarding Bree's mother (very out of the blue) and a feeling of abruptness at times only to have it explained away through flashbacks. Still, I enjoyed Grace Between Mercy and can't wait for Alex's story. 4.5 stars! ♥

Read my reviews for the In Between series:

Something There in Between (book one) - four stars - My Review

Grace Between Mercy (book three) - 4.5 stars - My Review (posted above)

Purchase Grace Between Mercy on Amazon.