Review: Between the Secrets by S. Ferguson (In Between #2) 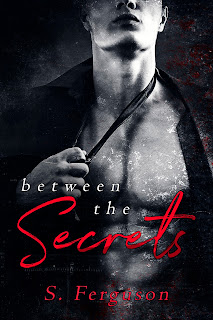 Between the Secrets is the second novel--it's an M/M--in S. Ferguson's untitled romantic suspense series, which I've been calling In Between on my notes because I like keeping stuff organized that way and it's the word that's used in all three titles, and the prologue overlaps with the epilogue in the series starter, Something There in Between. The books can be independently of one another, but my recommendation is that you read them in order because they are connected in terms of having the same recurring characters and so that you get the whole idea of what's been going on between the main characters plus all the shady goings-on from the beginning of the series.

Twenty-nine-year-old Greg Bissen and twenty-three-year-old Jake James were partnered as enforcers for Ron Wolfe for six years. They've become best friends but each one of them have secrets they're keeping from the other. Jake still has nightmares over everything he endured as a child and the end result of too many years of abuse. On the other hand, Greg's feelings for his best friend are far from platonic and keeping quiet while Jake is with women is breaking his heart. Both believe their secrets may end their friendship, but when danger comes looking for them and lives are lost, will Greg and Jake realize that some secrets bring two people closer rather than tear them apart?

This series got off to a promising start and I did like the first book, but this second one? It surpassed whatever expectations I had set. I loved Greg and Jake together! There were a few hints dropped in book one and that epilogue had me itching to see what would happen between them. Lo and behold, S. Ferguson managed to surprise me with the direction she took, and that's always a good thing when it's done well and benefits the overall story and its characters. There was Greg and Jake's will-they-or-won't-they story, but there was also the suspense part where they tried to figure out who was trying to take them out and what this person's motivation may be too.

It was great seeing Declan James and Bree Sutton, the main characters from Something There in Between, and of course, there's Ron Wolfe, owner of the bar where everyone hangs out, Keegan's, boss to Dec, Greg, and Jake, and father to Bree. I would have given this book a five-starred rating had it not been for me feeling as if I still hadn't gotten any solid answers as to why Greg was such an ass towards Dec in the series starter. That animosity is alluded to here as well, and if it was explained, I must have missed it. The book ends in a cliffhanger, one which has me looking forward to the third novel, Between Grace and Mercy. I'm giving Between the Secrets 4.5 out of five stars. ♥

Read my reviews for the In Between series:

Something There in Between (book one) - four stars - My Review

Purchase Between the Secrets on Amazon.