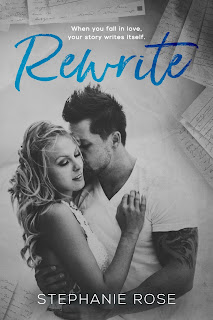 This was how it always should have been. I wished I could rewrite our story. I'd fix it so I'd never lose him in the first place, and we'd never hurt anyone on our way back to each other.

Rewrite is a standalone love story about two best friends who rekindle their friendship more than a decade after not seeing one another and must decide whether the time has finally come for them to own up to the very feelings they've been keeping from each other for even longer than their time apart. Stephanie Rose introduces us to Josh Falco and Brianna Morgan. They meet in kindergarten and proceed to become the best of friends through the years. When Josh decides to leave everything and everyone behind in order to enlist in the military, he knows the best thing to do would be to completely break ties with the only girl he's ever loved. However, letters sustain their friendship. When Josh returns to their hometown, he's finally prepared to make his feelings for her known and for him to plant roots in the very place he knows she would never leave. But what happens when he realizes that the one thing he asked for before he left--for her to forget about him--has finally come to fruition? It's taken Brianna years but she's finally moved on from waiting for the boy she loves, but what will she do when Josh comes home?

Stephanie Rose knows where my heartstrings are hidden and seems to have no qualms tugging on them whenever the heck she feels like it. Okay, not whenever but more of whenever she releases a new novel for me to peruse and assuredly fall in love with. Her latest title has main characters Josh and Brianna at different points in their lives. Where Brianna was ready to confess to Josh everything she was feeling when they were close to high school graduation, circumstances led Josh to go elsewhere. Now, just when Brianna is in a place where she's with someone who loves her--and someone whom she loves in return--Josh returns and decides it's time for him to own up his feelings for her. Gah! Timing is everything, and well, with these two, it seems to have sucked. I can readily admit that there were several moments that I was super frustrated with the back and forth, but then I also understood why Brianna was waffling as much as she was. Sure, Josh was the guy she loved for so long, but he left and she met an overall good guy who she's committed to, so she had to weigh the consequences of future actions.

I seriously liked Josh. He didn't necessarily push Brianna to make a choice between him and her boyfriend, but it was more of him prodding and nudging her in the right direction (that being him, naturally!). Should he have respected the fact that she was in a relationship and it's basically a cardinal rule that you never go for another man's partner? Yes, if we're being honest here, but love isn't always black and white nor is it rigid and set in stone. I think Josh saw the situation as both he and Brianna already having wasted too many years apart. Sure, it was mostly his fault, but the guy wanted them to spend the rest of their lives together, so he went after what he wanted most and that was Brianna. See, that's what I loved about this book. It made me think and to see things from all sides--yes, even Scott's and Sara's. Perspective changes depending on the person and the situation, and it was different for each of the characters. Not everything about Josh and Brianna's story is ideal, but these two had obstacles to hurdle and they did so knowing the reward--being together--was worth it. Five-plus stars for Rewrite. ♥