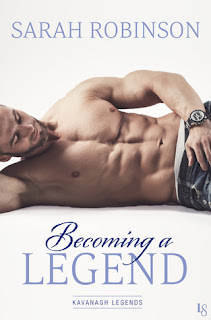 Becoming a Legend is the third book in the ongoing Kavanagh Legends series featuring the Kavanagh clan of New York. Sarah Robinson gives us middle child--and younger twin--Kane Kavanagh's story with Nora Hannigan. Kane has worked hard to get to the level he's at, one that has set him up for the national championships that'll prove that he's one of the top mixed martial arts fighters around. He's focused and he's ready. This is the one goal he's set for himself, and nothing's going to stop him from reaching it--not even the attraction he's had to Nora that's been around since he first met her. She's constantly making it clear she'd rather be anywhere but near him, but lately, Kane notices that she's been thawing towards him. One kiss leads to one night, and neither one wants to limit it to just a hook-up, although they also make it clear that nothing more can come of it, not with Nora busy with school and work and Kane busy prepping for his bout. They're good with keeping it a no-strings thing, so why is it that the more time they spend together, the more they both wish they were all in with every string attached?

Kane was a surprise because he always came off as cockier than the rest of his brothers in the first two books and I wasn't a fan when he decided to simply adopt his twin's ring moniker of "Killer" for himself without even discussing it with Kieran. Kane turned out to be an essentially good guy. He had some preconceived notions, especially when it came to him thinking that he was on his own and that he had reached the level of success that he currently had all by himself. Maybe it was his being a middle child and he thought that he had to work harder than all his other siblings to get the attention of his family or that he had no one to rely on but himself. Hello, they're the Kavanaghs! There was also a lot of back and forth when it came to his non-relationship with Nora, and I understood why Nora felt she couldn't invest all her feelings on him, but just like me, she had a thing or two to learn about Kane. This series gets better with each new book that's released, and the bond among the Kavanaghs clearly extends to all those they choose to spend the rest of their lives with. Becoming a Legend receives 4.5 stars. ♥

Read my reviews for the Kavanagh Legends series:

Breaking a Legend (book one) - four stars - My Review