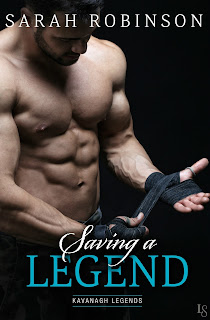 Saving a Legend is the second novel in the Kavanagh Legends contemporary romance series from author Sarah Robinson and is about the middle Kavanagh brother, twenty-five-year-old Kieran, who was incarcerated for aggravated assault in the first book, Breaking a Legend. Kieran was a rising star in the mixed martial arts scene but was found guilty and sentenced after having been involved in an illegal fight that led to his opponent nearly being killed. Two years later, he's been paroled due to good behavior, but he knows how much he's disappointed his parents and siblings. He intends to keep his rule-breaking days behind him and focus on moving forward. He's not sure, though, what kind of future he wants. Then he meets twenty-four-year-old florist and shop owner Fiona Doherty, who, as much as she would want to keep him at a distance, is intrigued by the man who her sister Shea has formed an unexpected attachment to. When they both let their guards down, will they wish they hadn't when their dark secrets are revealed?

Kieran Kavanagh is the brother that intrigued me the most when I was reading the first book, mostly because he was the one who wasn't physically present with his family. Was he a bad guy or was there something more to his being in prison? His return to the family fold also piqued my interest because not everyone gave him the warm welcome I would have expected from as close-knit a clan as the Kavanaghs. Two years may not seem all that long but it's long enough to form a chasm of sorts, making it clear that there's a bit of unease as to how the family dynamic will now be with Kieran back in the fold. I would have wanted to see more of his trying to make amends with his parents and siblings, and maybe having a better idea of just how different he was prior to his arrest so that there was more of a point of comparison as he made the necessary changes within himself now that he's free. It's that existing story arc of family that draws me to this series, and while I wanted more, I did like the interactions Kieran had with each member.

During my seven years as a preschool teacher, I had a number of students who were on the autism spectrum, so I do have some stock knowledge about the disorder. My hat's off to Sarah Robinson for making sure that she had the proper information to work off of while writing the book. Because of her attention to detail, she was able to make Shea Doherty a supporting character who wasn't the stereotypical autistic child, because the fact is, there isn't a singular category that those with this disorder fall under. Then there's Fiona Doherty, who experiences the ups and downs of caring for someone on the autism spectrum, and you empathize with her while also applauding how she goes above and beyond for her sister. My favorite thing about this particular book in the series was how it opens the eyes of those unfamiliar with autism or have pegged it with an old definition. With this second book, I find myself even more emotionally invested in the Kavanagh family and their stories. I'm giving Saving a Legend 4.5 stars. ♥