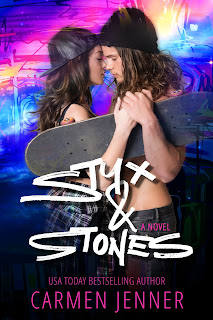 "Promise me you're not going anywhere."

His eyes dart from the road again back to me, but he doesn't say a word. We both know he can't. We both know it's a promise neither of us can keep. Seems like such a simple thing: don't die, but at seventeen, it's never been more complicated.

A quick word of advice should you decide to read Carmen Jenner's newest standalone release: have a box of tissues nearby. Styx & Stones is a mature young adult (YA) romance read and one look at the blurb will clue you in that you're in for a heartrending reading experience. This is the story of seventeen-year-olds Styx Hendricks and Alaska Stone, two regular teenagers who go to the same school but whose paths have never really intersected long enough for a meaningful exchange, even though Styx has been crushing on Alaska--whom he nicknames Stones--since they were in the fifth grade and she's noticed him as the loner guy from school. Styx's cancer diagnosis isn't a secret--it's become a fact of life for him, one that has his parents treating him like he's fragile and nearly everyone in his school as if he's going to infect all of them. So, imagine his shock when none other than Alaska shows up during one of his chemotherapy sessions. He's had years to fall in love with her; he's pretty sure he can convince her that she's falling in love with him, too. Styx'll show Alaska they've got time to love and live, limited as it may be.

You can pretty much tell from the blurb for this novel that it's going to be gut-wrenching read, what with the mention of cancer and chemo sessions, and it does put the idea of a limited amount of time out there, so it's not exactly spoilery. However, for the sake of those who MAY be wary, feel free to skip this review if you think it'll spoil the book for you. Here's the thing: Styx and Alaska aren't your typical seventeen-year-olds. Yes, there's angst because of the cancer aspect in the story--and trust me, it isn't tackled like it's a non-entity, but it is handled exceptionally well by the author--but the main characters refuse to wallow for long. Here, cancer isn't merely an idea that's brought into the love story--it's a fact of life, a reality that needs to be dealt with simply because that's how life goes. The burden that's put upon the shoulders of these main characters would have brought much older people down on their knees, but in both their moments of courage and brief glimpses of very real despair, they are awe-inspiring in their grace and acceptance. Styx & Stones is truly Carmen Jenner at her very best. Five-plus stars. ♥