Review: Puzzle Me This by Eli Easton 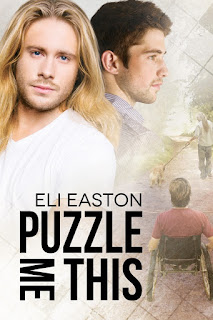 As much as I have a thing for angst, I would never, ever say "no" to a healthy dose of cuteness and sweetness...and okay, a pinch of angst as the cherry on top. Eli Easton's just re-released a novella entitled Puzzle Me This, which was originally published by Dreamspinner Press five or so years ago, but this was a completely new-to-me title and it was every bit as adorable as I'd heard from friends who've read it told me it would be. Imagine a guy who finds out he's got himself a secret admirer who happens to be a crossword puzzle creator. It's creative and quite cute--and okay, maybe a tad stalker-like but don't all crushes start that way?--and it was the beginning of a one-of-a-kind romance from one of my favorite go-to authors. All of that and I read it in an hour's time, so win-win all the way!

When thirty-year-old game designer Luke Schumaker finds a copy of a Philadelphia broadsheet on his doorstep, he isn't quite sure what to make of it. After all, he doesn't have a subscription with the Examiner, and after a bit of asking around, neither do any of his nearby neighbors. But if he thought that was curious, it's the crossword puzzle that really grabs his attention. It seems that Luke's got himself a secret admirer, one who shows his interest by way of clues he's added to the occasional crossword puzzle. After Luke hooks up with another guy, however, the clues stop, leaving Luke feeling both sad and guilty. But maybe with a bit of snooping of his own, Luke will find a way to get his own message across, and when he learns that it's actually twenty-eight-year-old wheelchair-bound Alex Shaw from the same apartment complex, will it be the start of a beautiful friendship or an extraordinary romance?

I absolutely enjoyed reading the heck out of this novella! Luke and Alex had such a unique beginning to their story, and the fact that theirs was such an easygoing friendship slash romance with just one major hurdle--that seriously made me want to smack Luke upside the head!--it turned out to be the perfect thing for me to read after a slew of heavier, more emotional ones. Fairly lighthearted with enough angst to satisfy even an addict like me, Eli Easton weaved the sort of story that allows itself to stand apart from the crowd without trying to hard. And there was even a dog named Trevor that had me missing my precious furbaby, Oliver. Sigh. I'm giving Puzzle Me This 4.5 stars. ♥

Purchase Puzzle Me This on Amazon.