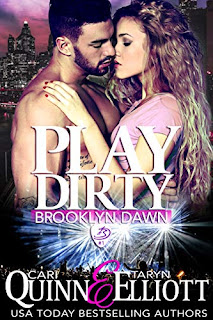 Note: An advanced reader copy was provided by the authors.

Play Dirty may be a lengthy read--think about three or more hours, depending on how quick of a reader you are--but Cari Quinn and Taryn Elliott more than make that time worthwhile with one hell of a fantastic read and a fabulous beginning to their Brooklyn Dawn series. If you're familiar with Quinn and Elliott's previous rock star romance series--Lost in Oblivion, Hammered, and Found in Oblivion--then you know that this particular writing duo is the team to beat when it comes to this romance sub-genre. With their latest series starter, they give their readers something different from any of their previous series starters, something that I as an avid reader appreciate because who doesn't want to see their go-to authors sharing fresh material with loyal fans and readers?

When Lindsey York meets Alexander Nash in a club called Ruin, Nash did exactly that, but theirs wasn't the sort of love story that went from meet-cute to a bit of complicated to a happily-ever-after. In short, it wasn't a fairy tale. Their one encounter three years prior isn't some mere bump in the road, not when she's the lead singer of Brooklyn Dawn, music industry's next promising band, and he happens to be their music producer. Working together with so many unresolved issues could break them, but how do you deal with two people who refuse to budge? The chemistry between them is as palpable as ever, but delving back could prove to be far too combustible for their liking. But some things are simply inevitable, and Lindsey and Nash are very much prepared to play dirty.

Cari Quinn and Taryn Elliott have yet to disappoint when it comes to rock star romances, but even I didn't expect how awesome their Brooklyn Dawn series starter turned out to be! Talk about taking things up a notch, Quinn and Elliott have made Lindsey York and Alexander Nash one of their more memorable couples, sharing such a strong connection with a whole lot of tension--sexual and otherwise--the thrums throughout their story. This may be a longer read, but it's so well-paced with a well-developed story and characters that you don't even notice just how much time has passed from the moment you start reading till you get to the very end. This does NOT end with a cliffhanger, meaning that Lindsey and Nash do get their happy ending. Five stars for Play Dirty. Bring on Play Fast! ♥