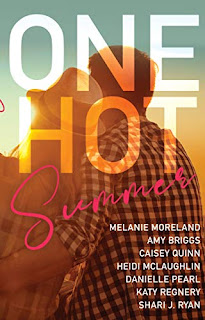 Note: An advanced reader copy (ARC) was provided by the authors via Buoni Amici Press.

One Hot Summer is a multi-authored anthology featuring all-new short stories, some of which serve as prequels for future full-length novels and other which stand alone, from Amy Briggs, Heidi McLaughlin, Melanie Moreland, Danielle Pearl, Caisey Quinn, Katy Regnery, and Shari J. Ryan. For the purposes of this review, I only took on four stories, narrowing it down mostly to those based on having read those authors' previous work and basically on one particular personal experience. The stories are Summer Seduction by Caisey Quinn, Love's a Beach by Danielle Pearl, Single in Sitka by Katy Regnery, and The Secret at Sunset by Shari J. Ryan and the average rating is four stars.

Summer Seduction by Caisey Quinn is the story of seventeen-year-old Emersyn Tyler who has decided to take advantage of one summer night to enjoy herself with her friends at the local fair but whose evening changes once she bumps into twenty-four-year-old Aiden Singleton. This story is a prequel to Emersyn and Aiden's shared unforgettable moment during the summer and the ending is a bit of a cliffhanger. It was a pretty good read, with an introduction to the main characters as well as some standout supporting characters. Emersyn and Aiden's story continues in Student Seduction but I have no idea when that one releases. I'm giving Summer Seduction 3.5 stars.

Love's a Beach by Danielle Pearl is about eighteen-year-old townie Liza coming to the realization that her boyfriend isn't worth the trouble that he keeps throwing her way during their last summer before everyone heads to their respective colleges and universities. The unexpected arrival of Noah Reed, a boy who used to spend a lot of his summers in Atlantic West. I quite liked this prequel, with the author giving a strong enough introduction to the main characters without divulging too many details, thus making me curious enough to want to learn even more when the series kicks off with its full-length novels. I'll be keeping on eye out for those! 4.5 stars for Love's a Beach.

Single in Sitka by Katy Regnery was my favorite among the four that I read! This was a lighthearted story about thirty-two-year-old journalist Amanda McKendrick who heads to Sitka, Alaska to report on a story about saving the bears in the area and meets thirty-six-year-old single dad of three and Trooper Academy instructor Luke Kingston. Manda and Luke's story had me absolutely smitten! I loved their chemistry along with the complexities of Luke living in Sitka and Manda living in Seattle and Luke's three kids and how they see Manda's presence in their dad's life. The ending left me wanting far more, so I'm eagerly awaiting the full-length novel of Single in Sitka. Five stars!

The Secret at Sunset by Shari J. Ryan is the last book in the anthology, and it tells the story of photo editor Alexa who heads to Cabo with her two best friends for a girls' weekend right before one of them is set to marry. Feeling out of place because her friends are happy and in love, Alexa walks off and ends up meeting Lincoln, a guy selling her on the idea of tourist activities. This was a good read, although I wasn't a huge fan of Alexa's, who seriously came off as a wee bit selfish. I did like Alexa's best friends, Grace and Macy, and Lincoln seemed like a really nice guy. This quick read does have a happy ending, so no evil cliffhangers await. The Secret at Sunset garners four stars.