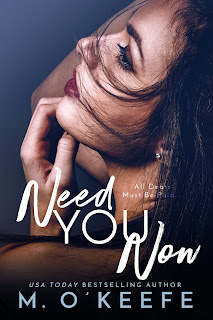 Need You Know is the fourth novel in The Debt series penned by M. O'Keefe (aka Molly O'Keefe), and while all the books are tied together by nightmarish and life-changing period of time in the lives of certain main characters, they are promoted as standalones, save for the first two which must be read in order. Here's the thing, though: I'm highly recommending you read the currently available books in order. I know that many authors do the whole "you can read this as a standalone" thing so that if you're new to them or the series, you can just jump in at any point and still fully understand what's going on. But yeah, there's a strong connection among the characters and their experiences while at St. Joke's, aka St. Jude's Home for Court-Placed Juveniles. So consider this a humble suggestion on my part, but again, that's all it is--a suggestion--and the series happens to be quite good, so win-win.

If you're familiar with the series, then Rosa Burns should be familiar to you. She was sixteen when she was placed with St. Joke's and pregnant with the baby that she and the boy she loved created. She knew that she had only one viable option and that was to ensure that the baby would be placed in the custody of Marco Zambrano, the love of her life and the heir to a successful construction company. She spent five years away from the people who mattered most--her husband and her daughter--but now, she's free...well, as free as she can hope to be. Her family legacy isn't anything to be proud of, and if she isn't careful, it'll come looking for. The last thing she wants is for it to touch either Marco or their daughter, Ariella, but as much as she stays away from them, Marco isn't letting her go.

As can be expected, M. O'Keefe delivers yet another enticing read in her The Debt book universe, but then I've yet to be disappointed by any of the books that this author's released and that I've read (because hello, I haven't read ALL of them at this point in time). I loved seeing how much Rosa developed as a character and Marco's devotion to her is the sort of thing that reminds me why love in its truest form is something I love reading about. For fans of the series, familiar characters abound, and I'm hoping we haven't seen the last of this book world because there's one particular peripheral character whose story I'm still waiting for. Need You Now was a fantastic 4.5-starred read. ♥