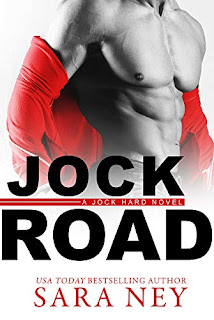 Jock Road is the third full-length novel--but fifth release overall--in Sara Ney's Jock Hard series, and it has one of the most endearing male main characters I've come across in a good, long while. He's none other than twenty-two-year-old Jackson Jennings, Jr., aka Triple J to his teammates and fans--All-American, All-State, All-Division, All-Texan, and All-Virgin. Considered one of the best collegiate wide receivers in the country, Jackson's life has been geared towards becoming a professional football player and he can't afford distractions, not if his father has any say in it. So, limit the partying, no vices, and absolutely no girlfriends. And then he cuts the line at the student cafeteria and takes a chicken sandwich meant for fellow Junior and twenty-one-year-old Charlotte Edmonds, a girl who doesn't care how much of a hot or talented jock Jackson happens to be and isn't afraid to try and put him in his place. When he finds her waiting on the side of the road with a flat tire, it becomes the beginning of a weird sort of friendship, one that quickly starts feeling like more. But can Jackson afford risking his future going down this road?

Okay, I admit it: I was kinda iffy when it came to Jackson in the first couple of chapters of the book, and that mainly had to do with the guy thinking he had some sort of bonus privileges on campus because of who he was. The driving around with his headlights on bright (I hate it when I encounter drivers like that on the road because they can blind you when you while you're driving) or cutting into line and snagging someone else's food (nope, sorry, I don't care who you are; there's a line--use it like everyone else). Argh! But the more I got to know the guy behind the whole athlete persona, the more I seriously liked him. He was different from the usual college jock--with an insecurity and awkwardness to him that made me want to give him a hug. I also liked Charlie, from what little was told about her because I did feel like I didn't get to know her as much as I did Jackson. There was also the issue with Jackson's father and what Jackson's plans were as far as the draft was concerned that felt unresolved. Jock Road's first three quarters were strong and promising, and I only wish the last part was as strong. It gets four stars. ♥