Review: Happy for You by Anyta Sunday (Love & Family #3) 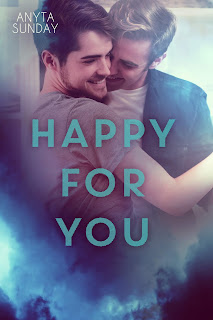 When it comes to slow burn romance, no one does it quite as well as Anyta Sunday can, which is why she's a favorite go-to author of many an M/M romance fan and reader. Her latest release is the third novel in her Love & Family series, and it's about a guy named Mort desperately trying to make amends with his best friend and his best friend's family after abruptly leaving twelve months prior. There's angst and there's humor, and naturally, there's that slow burn romance that's deliciously addictive as well as some unresolved family drama. Now, Happy for You is a complete standalone, with the series very loosely tied together by at least one character in each book's connection to Kresley Intermediate, a school located in New Zealand, also known as where the entire series is set.

It's been about a year since twenty-seven-year-old Mort Campbell last saw anyone from the Rochester family--the same family that made him feel more like one of them, whose home felt more like home, than his own. He had his reasons for leaving, but now, he's back and what he wants more than anything is to rebuild his relationships with every single one of the Rochester siblings--Michael (twenty-seven, aka Roch and Mort's estranged best friend), Felix (twenty-four), Tiffany (sixteen), and twins April and May (nine). When Felix's license is suspended, Mort sees it as his opportunity to get close enough to try and mend fences, one day and one scheduled chauffeured pick-up and drop-off at a time. Of all of them, it's Felix that Mort hopes to reconcile with most--the same Felix who was the kid brother who once had a crush on Mort...the same Felix Mort started secretly crushing on a couple of years ago.

Ah, nothing satisfies like a well-written slow burn romance with a le sigh-worthy happy ending! My heart broke for both Mort and Felix, especially given Mort's reason for leaving and how Felix has gone above and beyond in taking care of his three sisters and his mother. I'll be honest, I was kinda-sorta-maybe a wee bit ticked off with Roch considering he was the oldest. Yeah, yeah, he had a girlfriend and all that, and I'm not saying he needed to put his life on hold, but hello, he could have helped out more. On the other hand, I adored Tiffany and the twins--Tiffany for how protective she was of Felix and the twins for being that mix of naughty and nice. I love that Mort did have to earn back the trust of the five siblings because while he didn't want to leave them in the first place, he still did. Now, as far as he and Felix were concerned, well, let's just say that it was fun seeing these two find their footing with each other and coming into their own as individuals and a couple. Gah! I so adored Happy for You! Five stars! ♥

Purchase Happy for You on Amazon.