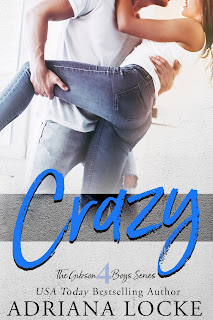 I stand on my tiptoes and bring my lips to his. God, I love kissing this man. And I'm in awe that he didn't want my knees first, pleasuring him, but wanted to kiss me before. First. Like it was more important.

What sort of man does that?

This one. The one with a massive heart and a beguiling soul. And it's at this moment that I know, without a doubt, there aren't walls big enough to save me from him, If he wants to break my heart, I can't do anything to stop him.


Step aside, Walker, Lance, and Machlan Gibson. Wesley Ward has snagged my heart. Who is this Wesley--sometimes called "Wes" by his...special someone...who shall remain nameless through this review!--I speak of? Well, he's none other than Peck Ward, fellow lovers of the Gibson Boys series, and the one male character that many a reader and fan have been itching to get to know even better. There's also been A LOT of strong feelings and debate regarding who Peck should end up with. Could it be the girl everyone loves to hate--Molly McCarter--or the feisty bartender at Crave--Navie (whose last name I don't recall being mentioned)--or someone completely new? I'm not telling because, hello, I'm keeping this spoiler-free AND I don't want Adriana Locke coming after me if I do!

Peck Ward is the guy who would give the shirt off his back if someone needed it and wouldn't even think twice about doing so. That's just the sort of person he is, and he makes no apologies for it nor does he have some sort of hidden agenda. He's simply a good guy with a giving heart and a gentle soul. Oh, and he also happens to be one hell of a dancer once he hops atop the bar at Crave and shimmies and sways (and let's not discount those pelvic thrusts either). He's loyal to his family and cares deeply for his friends. Peck is, without a doubt, one of the best guys around, but happily-ever-after is something that may not be in the cards for him because he's never been enough for anyone outside of his Nana to stay...to love...to come first and love beyond measure. Even if he's found the perfect one for him--the one he'd want forever with--the question remains: will she think he's perfect for her?

Le sigh. I absolutely, undoubtedly, resolutely ADORED every single thing about this book! Peck has always been this peripheral character who stood out for all the right reasons, piquing the curiosity of readers from the get-go. I already knew the guy deserved his own happy ending, but after details of his back story, particularly his childhood, came to light, the more clearly it became how much someone as good as him should be blessed with that special person to spend his life with. I had my guess as to who he'd be paired with, and well, I'm happy to say I was right. Wink, wink. Go read the book, people. Crazy receives five-plus stars. Vincent next, please? And I need more Nana! ♥