Review: All the Forbidden Things by Lesley Jones 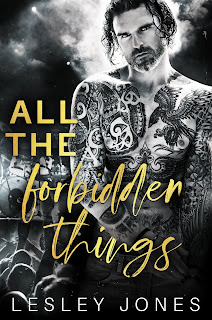 While I may have the Carnage books--the first novel, the original duet, and the most recent box set--in my tablet, All the Forbidden Things is officially my introduction to Lesley Jones's writing. It's a standalone that has a happily-ever-after, but there are recurring characters, some of whom I assume are from the author's Carnage series and some that I'm honestly not sure if they've had their own stories told because I went searching on Goodreads and Amazon and none of the books available for the author on either of those sites mentioned any of the already married band members of Young Wild and Rong (aka YWR). So yeah, I was super curious about Callum and Melissa Wild as well as Jay and Marnie (whose last name isn't mentioned, and I can't help but wonder why his last name--whatever it may be--wasn't part of the band's name). Side note: If these two couples do have their own books OR if they just happen to have side stories in the Carnage series, please leave me a note via my comments section and clue me in. Anyway, what I'm basically saying is you can read this on its own but there are a lot of side characters.

All the Forbidden Things is a rock star romance with a falling-for-your-best-friend's-sibling angle to it. Max Young is a thirty-eight-year-old rock star who was once known for his bad boy ways but has now settled down as a husband to his wife of less than a year and his one-month-old daughter. But then his wife decides to throw a few truths his way, basically ending Max's idea of domestic bliss as he knew it. He's fielding help and support from his mother, band mates, and friends, but what he desperately needs is live-in help with his baby. Help arrives in the form of Billie Wild, a young woman recuperating from a nightmare of an experience at the hands of her former employer. She also happens to be his best friend slash band mate's twenty-two-year-old sister--the same girl Callum and Mel raised after her parents were killed over a decade ago. She's grown up in the years since Max last saw her, and he's positive that the thoughts running around his head would get him beaten up by Cal. But Max is the guy Billie crushed on going on--the same guy she still fantasizes about today. Will Billie be Max's distraction or his salvation?

I had pretty high expectations for this book, thanks in large part to a lot of the glowing reviews that I perused on Goodreads. There were certainly a number of things I liked about it--the connection between Max and Billie, Max's devotion to baby Layla, the camaraderie that Max shared with his band mates, Billie's friendship with her best friend, and yes, even the manipulative machinations of Max's soon-to-be ex-wife. The story was entertaining, and I was actually rather surprised that it read much faster than I had anticipated because of the number of pages it was going in. Where the book falters, however, is its tendency to be repetitive as well as the number of supporting characters that are in the story, and I get it, this book is supposed to be a standalone, but there's just a lot of history among so much of the cast of characters and this being my first read from the author, well, I did feel lost at times. Funnily enough, for a story that takes place between one to two weeks (not including the epilogue) over 400 pages, it did feel rather rushed. Still, I did enjoy my overall reading experience of All the Forbidden Things. 3.5 stars. ♥

Purchase All the Forbidden Things on Amazon.