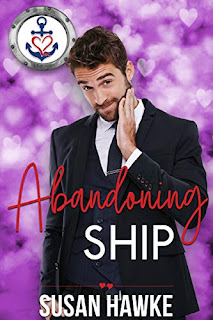 Abandoning Ship is the seventh book in the multi-authored Valentine's Inc. Cruises and it's penned by one of my favorite M/M romance authors, Susan Hawke. This was a friends-to-lovers story with a bit of a twist that comes in the form of a fake relationship but it isn't between the main characters. When Sawyer Muller meets his new roommate, he immediately notices how hot the guy is, but instead of making any sort of play for Ryan Abernathy, it's his sister, Julia, that Sawyer later finds himself getting chummy with. Just like Sawyer, Julia's bisexual with very conservative parents, so she suggests that they have a fake relationship in order to thwart any matchmaking efforts on her parents' part. Over the years, Sawyer and Ryan forge their own close relationship, neither one aware that the other fancied him just as much. When Julia decides marrying Sawyer would be the best way to secure her trust fund. It would only be for six months anyway, so what's the harm? So off the entire Abernathy family goes on cruise ship, but instead of smooth sailing, troubled waters could be on the horizon for Ryan, Sawyer, and company.

This was a fun read with Susan Hawke's patented brand of lighthearted humor and a pinch of angst. The whole fake relationship twist was something I considered a nice change of pace from the norm. It did take a while for me to see the chemistry between Ryan and Sawyer, and I think a lot of that had to do with the fact that a good portion of the first few chapters had Sawyer with Julia, almost as if they had an even closer friendship than that of Ryan and Sawyer. Things did pick up soon after one particular, erm, non-event on the ship that became a turning point in Ryan and Sawyer's relationship. From there, things progressed quite nicely and if I thought Julia was a wee bit bratty and self-centered in the first half of the book, the second half showed her in a far better light. The villains in the story definitely come in the form of the Abernathy siblings' father, who was both misogynistic and homophobic, and that's mostly where the angst comes from. Other than that, though, this was an easy-breezy read, one that definitely works well as a standalone even if it is part of a series. Abandoning Ship snags four stars. ♥