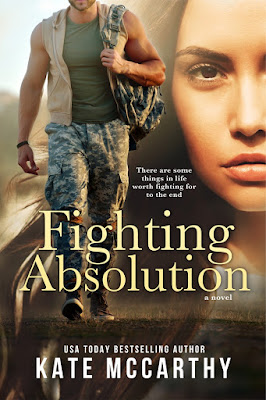 About Fighting Absolution
She's a combat medic.
He's SAS, and her best friend.
They weren't supposed to fall in love.

At fifteen, Jamie Murphy finds herself broken and alone, convinced she doesn't need anyone.
Until she does.

Bear is the boy behind the fence, the one who was there for her when no one else was.
Until he's not.

Left with nothing, Jamie joins the army hoping it will give her purpose. The last thing she expects is the best friend from her past to reappear in the dusty plains of a war-torn country. No longer the boy she once knew, Bear is now a man: big, bearded, and SAS—one of the army’s elite.

Soon Jamie finds herself not only fighting against her enemies, but her feelings for a man who left her once before. Can she risk losing him all over again?

Fighting Absolution is a friends to lovers romance and features characters from Fighting Redemption, but is written as a standalone. 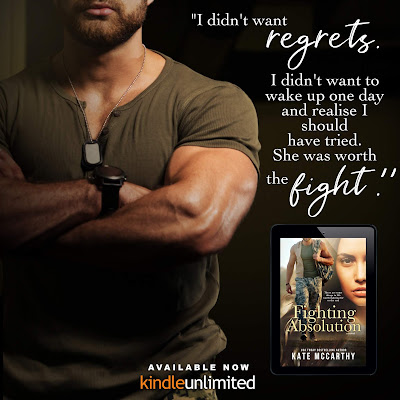 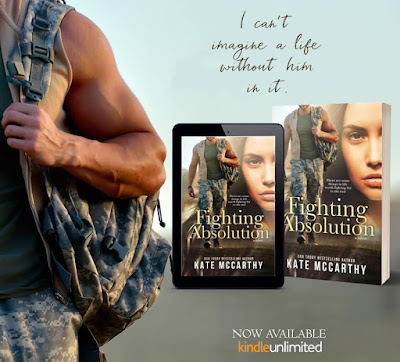 An Excerpt from Fighting Absolution
After an early night, I wake in the morning with my body sagging into the ground. “What the hell?”

I roll and flail, my air mattress squeaking like a little bitch.

Bear laughs and I turn. He’s watching me, thoroughly amused. “I’m not here for your entertainment,” I hiss, my back aching from an uncomfortable sleep.

“Someone needs her coffee.”

“Did you poke a hole in my mattress?”

“No, but there’s something poking a hole in my—”

“For the love of god!” I rise up, the knife from beneath my pillow in hand. “I’m gonna stab yours just for that.”

“No!” He laughs, half-rising from his own bed, warding me off with his massive paws. “That damn thing is probably why you woke up on the ground.”

I lunge across the tent, my knife jabbing straight into his inflatable mattress. It tears a long, deep gash in the corner. Air hisses out in a wheezy rush. “What in the actual fuck?” he shouts, falling back with a stunned laugh. “You’re such a bitch!”

The knife drops from my hand, and I double over, gasping with laughter while the airbed deflates around him, sinking him slowly to the ground.

“Now neither of us have a bed!”

“Oh well.” I tuck my knife away. “We can start on those bottles of red tonight until we can’t feel a damn thing, and then it won’t matter.”

I unzip the tent and step out, my jaw cracking from a yawn that stretches my face. “Bring me coffee!” he orders from inside the tent.

I turn my head, sneaking a glance his way. He’s standing over his duffel bag, clad in nothing but a tight pair of bright blue cotton boxer-briefs. It’s almost a physical punch. I linger a moment before I look away, back to the ocean, trying to dispel the image, but my mind won’t let it go. The wide, muscled shoulders, his tattooed arms, the thick washboard abs, his body scarred from combat and a lifetime of hard and heavy training.

I shiver with a sense of longing and have to remind myself that it’s just Bear as I start on the coffee. The same Bear who laughed his ass off when I tripped on the edge of the jetty in Broome and fell in the water. The one who snores like a freight train after one too many beers. The one slowly turning into a mountain man because he hasn’t shaved since we left. The very same Bear who tips his head back each night in his camp chair and makes me scratch his head with my nails while he sits there and whimpers like a little girl. 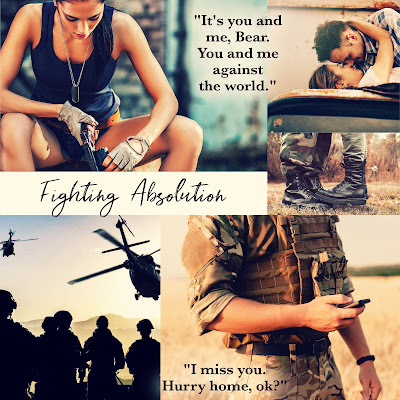 About Kate McCarthy
Kate McCarthy is the USA Today bestselling author of The End Game, Goodreads Nominee for Best Contemporary Romance Fighting Redemption, and the Give Me series. When she's not plotting or writing, she works as a financial officer.
Kate has two mini mes (both bookworms to her delight), three Dachshunds named Petie, Maximus and Thor, and a fish named Cash (who unfortunately suffers from resting bitch face). She lives in Brisbane, Australia and decided to miraculously stop ageing at 30.