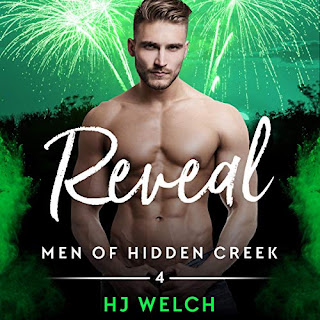 H.J. Welch is a new-to-me author and her contribution to the multi-authored fourth season of Men of Hidden Creek is my first book from her. On the other hand, Nick J. Russo is a familiar narrator to my ears, having listened to numerous audiobooks where he brought stories to life. He's been the narrator throughout this audiobook series, but while this is already the fourth season, this is my first go-around with the series as a whole and it's been a rather fun-filled listening experience four audiobooks in. So far, I've enjoyed how each story is a standalone but is tied with all the others because of the Texas town.

Reveal is the story of Jason Miller and Channing Forster, with the former being a NASA engineer and the latter a firefighter. Jason and Channing were childhood friends and neighbors, and Channing comes to Jason's rescue after he overhears Jason's homophobic co-worker bullying him. The two guys engage in a fake relationship during a NASA work getaway. Channing's always been straight, but spending time with the openly gay Jason has him wondering if he's actually bisexual and if their fake relationship can turn into the real thing. The question is: will Jason allow himself to see that Channing truly loves him?

I quite adored Channing! The guy was the poster child for good guys everywhere. He had a heart of gold and there was no doubting how sincere his feelings were for Jason. Interestingly enough, it wasn't his realization that he was bi that became the stumbling block for what he and Jason were building together--it was Jason's own insecurities. As sweet as the guy was, there were moments where I wanted to pull him aside and shake him so he'd realize that he was worth more than how others saw him. H.J. Welch wrote an endearing story, one that Nick J. Russo brought admirably to life. 4.5 stars for Reveal. ♥