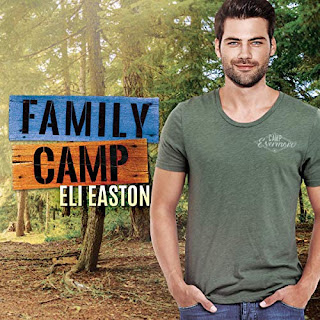 Note: The audiobook was provided by the author via Signal Boost Promotions.

Whenever I read or listen to an Eli Easton story, it's almost guaranteed to be yet another one that I won't be forgetting anytime soon. I read Family Camp, the first in her Daddy Dearest series when it was released in March, but even though I already knew the story, I was still looking forward to listening to the audiobook, and a lot of that had to do with the author's choice for narrator. Matthew Shaw became an immediate favorite after hearing his narration of Easton's Robby Riverton: Mail Order Bride, which was on of my year-end favorite audiobooks for 2018.

Family Camp introduces listeners to Geo Anderson, an openly gay elementary school teacher fostering twelve-year-old Jayden and five-year-old Lucy with hopes of adopting them, and Travis Mayhew, a pitcher for the San Diego Padres who is very much in the closet. Due to a misunderstanding, Travis isn't all that welcoming when Geo and the kids show up at Camp Evermore, a summer camp owned by his family and where Travis is a counselor each year. The two get closer over the next few days, but is it enough for Travis to risk his career when rumors surface?

There's something about listening to Matthew Shaw narrate an Eli Easton-penned romance that makes me want to do nothing else but lean back and fall in love with the story and its characters. I adored Geo, and while it did take me a bit longer, I ended up liking Travis as well. From the themes of family and home to being true to yourself and falling in love, there was a lot to love about this audiobook, enough that I didn't realize that more than seven hours had already passed. Time flies when you're listening to an audiobook as good as Family Camp. This gets five stars. ♥