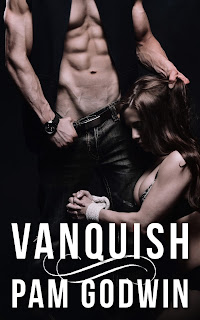 Well, well, well. Does a man like Van Quiso deserve redemption? Better yet, is he even actively in pursuit of such a seemingly impossible thing? Liv Reed may have shot him, but the hole created by that bullet was nothing compared to the one that Liv made when she headed off to her twisty yet happy ending with Joshua Carter. Cheesy? Maybe, but there's definitely nothing cheesy about Van or the story that Pam Godwin gives readers in Vanquish, the second novel in her Deliver series. I'm going to highly recommend that you read the series starter before diving into book two because while we do get Van's back story here, the connection he shares with Liv is introduced is in book one, and you'll have a better understanding of Van when you see all his interactions with her. Also, here's a reminder: this isn't some fluffy romance. This is dark, heavy, and intense. In short, it's Godwinesque.

Van Quiso is the epitome of the truest kind of antihero. I'm not talking about the kind of antihero that's unfairly gorgeous, wealthy, and intelligent yet seems to be missing a sensitivity chip (kudos to Jennifer Aniston for that classic line). Nope, the thirty-three-year-old former deliverer is cold and cruel and makes no apologies for his behavior. He is who he is and couldn't be bothered to give a fuck what people thought of him. The one girl he was prepared to offer that unfamiliar emotion called love to has chosen to be with someone else. Yes, the sinner he helped create went for the nice saint that she, in turn, made naughty. That doesn't mean, however, that Van has totally allowed Liv Reed to escape his dastardly clutches. He's got his eye on her...that is, until it's captured by thirty-four-year-old Amber Rosenfeld. In turn, Van decides Amber is his for the taking but will be taken by her, too?

Van, Van, Van... Going into this book, I feared there was simply no way the author would be able to redeem the man, what more offer up some form of absolution. Smack upside the head for my audacity to doubt Godwin's abilities to make the antihero to beat all antiheroes, dare I say it, likable and--insert weighted pause here--worthy of empathy. Maybe Van needed someone like Amber for me to see the man behind the monster. His personal back story is not an easy one to read, but it does give readers a more well-rounded idea of how and why he is who he is today. Amber, on the other hand, was such a unique heroine. As issue-laden as she was, the woman had fortitude and she threw back as well as she took. She is no shrinking violet, people. While Deliver remains my favorite between the two books, I have absolutely no qualms in recommending Vanquish. This is a bona fide five-star read. ♥