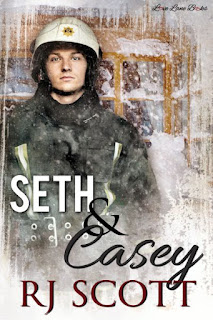 Originally released three years ago as part of a multi-authored series, RJ Scott has re-released Seth & Casey, a novella about husbands Seth Wild and Casey McGuire. Friends since Seth was ten and Casey was eight, in love since they were teenagers, and married for five years, these two men facing a tumultuous time in their relationship. After suffering numerous injuries during a fire, Seth has spent the past six months growing angrier and more despondent over his eight-year career as a firefighter. Casey's tried to be there by his side, but with his husband shutting him out and refusing to speak to a therapist, they've reached a breaking point. As Seth pulls away, he, in turn, pushes Casey away. When the school teacher and his students--including their nephew--are trapped by the monstrous snowstorm, Seth vows to rescue them, but is it too late for him to rescue his marriage?

When I started the novella, I felt as if I had been dropped into the middle of the story and had missed out on a quite a bit of history between Seth and Casey. The author does let readers catch up through flashbacks and internal musings by both main characters, so you do learn what led to the two separating. There was no quick fix to what was ailing Seth or his marriage to Casey. Both men feel frustrated with each other and the state of their marriage, and I actually liked that they struggled with moving forward. There was a clear problem with their communication, but then their circumstances didn't exactly start from some petty misunderstanding. I liked that the love was already there between Seth and Casey and that even with their issues, the love never really waned. I did wonder though about Seth's question to Casey in the end, but overall, I enjoyed Seth & Casey. It gets four stars. ♥