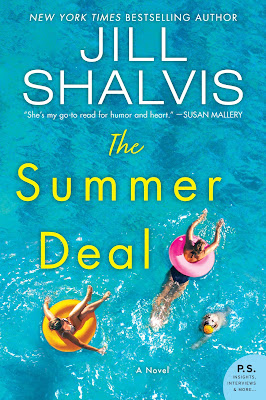 About The Summer Deal
From New York Times bestselling author Jill Shalvis comes a friends-to-frenemies-to-lovers story… Add in a few secrets. Shake. Stir. Then read on a lazy summer day at the beach…

Brynn Turner desperately wishes she had it together, but her personal life is like a ping-pong match that’s left her scared and hurt after so many attempts to get it right. In search of a place to lick her wounds and get a fresh start, she heads back home to Wildstone.

And then there’s Kinsey Davis, who after battling serious health issues her entire twenty-nine years of life, is tired of hoping for . . . well, anything. She's fierce, tough, and she’s keeping more than one bombshell of a secret from Brynn -- her long time frenemy.

But then Brynn runs into Kinsey's best friend, Eli, renewing her childhood crush. The good news: he’s still easy-going and funny and sexy as hell. The bad news: when he gets her to agree to a summer-time deal to trust him to do right by her, no matter what, she never dreams it’ll result in finding a piece of herself she didn’t even know was missing. She could have real connections, possibly love, and a future—if she can only learn to let go of the past.

As the long days of summer wind down, the three of them must discover if forgiveness is enough to grasp the unconditional love that’s right in front of them.

Add The Summer Deal on Goodreads.

An Excerpt from The Summer Deal
Brynn Turner had always wanted to be the girl who had her life together, but so far her talents hadn’t led her in that direction—although not for lack of trying.
Mentally recapping the week she’d just endured, she let out a stuttered breath. Okay, so her life skills needed some serious work, but as far as she was concerned, that was Future Brynn’s problem. Present Brynn had other things on her mind.
Like surviving the rest of the day.
With that goal in mind, she kept her eyes on the road, and three hours and two 7-Eleven hot dogs after leaving Long Beach in her rearview mirror, she pulled into Wildstone. The place that reinvented itself many times over since it’d been an 1800s California wild, wild West town complete with wooden sidewalks, saloons, haunted silver mines, and a brothel. Sandwiched between the Pacific Ocean and green rolling hills filled with wineries and ranches, Wildstone had once been her favorite place on earth.
Parking in the driveway of her childhood home, she took a minute. It’d been a decade since she’d lived here. She’d gone off to attend college and to conquer the world, though only one of those things had happened. She’d been back for visits, but even that had been a while. Six months, in fact. She’d stood in this very spot and had asked both of her well-meaning moms to butt out of her life, saying that she knew what she was doing.

She’d had no idea what she was doing.

Note to self: You still don’t.

With a sigh, she pulled down her visor and glanced in the mirror, hoping that a miracle had occurred and she’d see the reflection of someone who had their shit together. Her hair was knotted on top of her head with the string tie from her hoodie because she’d lost her scrunchie. She was wearing her old glasses because she’d lost her newer pair. Her face was pale and her eyes were puffy and red from a bad combo of crying and not sleeping. She wore yoga pants that hadn’t seen a yoga class since . . . well, ever, and in spite of being nearly thirty, she had a big, fat zit on her chin.
In short, she looked about as far away from having her shit together as she was from solving world hunger.

Knowing her moms—sweet and loving and nosy as hell—were going to see right through her, she pawed through her purse for a miracle. She found some lip gloss that she also dabbed on each cheek for badly needed color. As a bonus, she found two peanut M&Ms. Couldn’t waste those, could she? She shook her purse looking for more, but nope, she was out of luck.

The theme of her life.

With a sigh, she once again met her own gaze in the mirror. “Okay, here’s the drill. You’re okay. You’re good. You’re happy to be home. You’re absolutely not crawling back with your tail between your legs to admit to your moms that they were right about Asshole Ashton.”
Swallowing hard, she got out of her hunk-o-junk and grabbed her duffel bag and purse. She’d barely made it to the porch before the front door was flung open and there stood her moms in the doorway, some deep maternal instinct letting them know their sole offspring was within smothering distance.
Both in their mid-fifties, their similarities stopped there. Olive was pragmatic and stoic, and God help the person who tried to get anything by her. She was perfectly coifed as always, hair cut in a chic bob, pants and blazer fitted, giving her the look of someone who’d just walked out of a Wall Street meeting. In sharp comparison, Raina’s sundress was loose and flowery and flowing, and she wore beads around her neck and wrists that made her jingle pleasantly. She was soft and loving, and quite possibly the kindest soul on earth. And where Olive was economical with her movements, Raina was in constant motion.
Opposites attract . . .
But actually, her moms did have something in common beyond their age—their warm, loving smiles, both directed at Brynn. It was her own personal miracle that they loved her madly, no matter how many times she’d messed up and driven them crazy with worry.
And there’d been a lot of times. Too many to count.
“Sweetheart,” Raina said, jingling as always, bringing forth welcome memories: growing vegetables in the back garden, taking long walks on the beach to chase seagulls, and late-night snuggles. Raina opened her arms and Brynn walked right into them, smiling when Olive embraced her from behind.
The three of them stood there for a long beat, wrapped up in each other. Catherine the Great Cat showed up, her appearance forewarned by the bell around her neck. She might be twelve and seemingly frail and delicate, but as with Brynn’s moms, looks were deceiving. Just beneath Cat’s skin lived the soul of an ancient prized hunter—hence the bell. No one blamed her for her instinctual drive to do this, but Raina did object to Cat dropping “presents” at her feet in the form of cricket heads and various other pieces of dead insects. Which made Cat the most adorable murderer who ever lived. She rubbed her furry face against Brynn’s ankles. Once. Twice.
And then bit.
“Ouch!”
“You know her rules,” Olive said. “A little love, a little hate. It’s how she is. Now tell us why you’re home unannounced, looking like something not even Catherine would’ve dragged inside.”
“I think she looks wonderful,” Raina said.
Olive’s eyes never left Brynn. “She hasn’t been sleeping or eating.”
“Trust me, Mom, I’ve been eating plenty.”
“Okay, then you aren’t sleeping enough or eating the right food. You’re as pale as . . . well, me.”
Olive indeed had the pale skin of her English ancestry. In contrast, Raina was Puerto Rican, and golden brown. Being a product of Raina’s egg and an unknown sperm donor, Brynn’s skin was a few shades lighter than Raina’s. Unless she was trying not to hyperventilate, of course. Like now. In which case she was probably even whiter than Olive.
“We can fix the eating right and sleeping, for a start,” Raina said with determination. She slipped her hand into Brynn’s, and as she’d been doing for as long as Brynn could remember, she took over. She settled Brynn onto the couch with one of her handmade throws, and in less than five minutes had a tray on Brynn’s lap with her famous vegan chickpea noodle soup and steaming gingerroot tea.
“Truth serum?” Brynn asked, only half joking. Raina was magic in the kitchen—and at getting people to spill their guts.
“I don’t need truth serum.” Raina sat next to her. “You’re going to tell me everything.”
“How do you know?”
“Because I made almond-butter cups for dessert and you love almond-butter cups.”
“You’d withhold dessert from your only child?”
“She wouldn’t, she’s far too kind,” Olive said. “But I would. In a heartbeat.” She sat on the coffee table facing Brynn. “Talk.”

New York Times bestselling author Jill Shalvis lives in a small town in the Sierras full of quirky characters. Any resemblance to the quirky characters in her books is, um, mostly coincidental.

Look for Jill’s bestselling, award-winning books wherever romances are sold and visit her website, www.jillshalvis.com, for a complete book list and daily blog detailing her city-girl-living-in-the-mountains adventures.