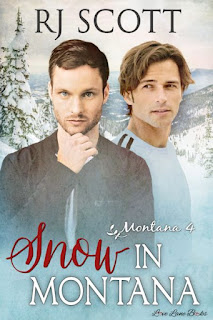 Snow in Montana is the latest novel in one of my favorite M/M contemporary romance series this year, Montana, and author RJ Scott introduces us to a new character, thirty-year-old actor Jordan Darby who falls for thirty-three-year-old sheriff Ryan Carter, who has been a recurring character in the series since The Rancher's Son, while also checking in with the three couples that were featured in the first three novels--Nate Todd and Jay Sullivan, Ethan Allens and Adam Strachan, and Justin Allens and Sam Walter--as well as my favorite M/F couple, Gabe and Ashley Todd. I'm not sure if this is the end of the series--though it felt like it was (wah!)--but if it is, I'm happy to say that it ended in quintessential RJ Scott fashion: happy, hopeful, full of heart, and brimming with a whole ranchful of love.

Jordan Darby and his twin brother Micah are still in the first year of their production company and they're raring to get started on their first television movie. They've chosen the Crooked Tree Ranch in Montana and Jordan has high but realistic hopes for the success of the TV movie. He is, after all, the King of Christmas TV movies and he's capitalizing on that as well as on a good script to get their production company off on the right note. One day, he hopes that he'll be able to film a different kind of romance--one involving two men--and maybe, just maybe, he'll be ready to admit that he's gay to the rest of the world. Then Jordan meets Ryan Carter and while a fling was his first consideration, the more time he spends with Ryan and in Montana, the more he dreams of his happy ending.

While Crooked Tree Ranch is inundated with cameras and cables as well as a cast and crew, Adam Strachan is having nightmares that make him wonder if they're part of the memories he lost. Starring in each one is none other than his best friend, Justin Allens. The last thing Justin wants is for Adam to look at him with fear, and for Adam's own peace of mind, Justin contemplates leaving Crooked Tree. Sam Walter, who is invested in the success of Branches, the ranch's restaurant, wants to be by his boyfriend Justin's side, while Ethan Allens is torn between defending his younger brother Justin and worrying over his fiancé Adam. With a closeted actor he's falling for, his closest friends in chaos, and his own family drama to contend with, things are far from boring for Ryan in Montana.

I loved how we got a new love story while having the rest of the couples' stories come full circle. There's a short story, aptly title Montana Short Story, that's available for free on the author's website and I think it serves quite well as a prologue to Snow in Montana. Ryan and Jordan's romance wasn't angst-ridden--which I appreciated, what with Christmas just a less than three weeks away--and I liked that there wasn't all this unnecessary drama when Jordan's sexuality came to light. Aside from romantic love and acceptance, the always present series theme of family and friendship remains at the forefront of this fourth and maybe final novel, which are all part and parcel of why I've fallen in love with these men and each of their heartwarming stories. Snow in Montana receives five stars. ♥

Read my reviews for the Montana series:

Purchase Snow in Montana on Amazon.