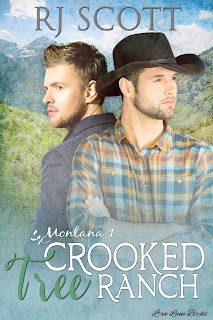 Crooked Tree Ranch is the first novel in author RJ Scott's Montana M/M contemporary romance series, and it was a series starter that I adored reading from beginning till the end. The Crooked Tree Ranch is owned by three families: the Todds, the Allenses, and the Strachens. After the disappearance of Adam Strachen and Justin Allens, the Strachens left and Justin’s father is still reeling from what happened even over a decade after and his older brother continues to search for them. The Todd brothers—Nate, Gabe, and Luke—took over after their parents passed away, but business has declined, and the Todds and Marcus Allens decide a marketing specialist’s expertise may help bring in new guests, but Nate would never have guessed city-born and -bred Jay Sullivan was exactly what a cowboy like him needed in his life.

This book wasn’t just about the love story between Nate and Jay; it was also about family, especially the Todds and the Sullivans. Both Nate and Jay were the respective heads of their families, and they took on the responsibility of making sure Nate’s brothers and Jay’s sister, niece, and nephew were taken care, putting their own needs in the back burner. On the surface, theirs could be seen as a country guy and city guy kind of story, but it certainly wasn't limited to that. They have their differences, but they also figure out that they have similarities as well, allowing them to balance each other out. I also liked that this was a slow burn romance, though I’m sure some people will think that a couple or so weeks is still too quick. They had to overcome their own first impressions of one another before becoming friends and then more.

Not only do we get one complete love story with this book, but we also get bits and pieces that make us curious about other potential characters. It’s clear that there are a number of unknowns when it comes to the families that own the Crooked Tree Ranch, especially the Allenses and Strachens because the two missing boys came from them. I read the synopsis for the second book in the series and I’m already counting the days until I get to read The Rancher’s Son and find out more about Ethan Allens and the John Doe who could hold the answers to the disappearance of his younger brother Justin and Adam Strachen. If you’re looking for a well-written romance with a quietly intense but sweet cowboy and a protective and caring city slicker wary of horses, I recommend you check out Crooked Tree Ranch by RJ Scott. Five stars. ♥