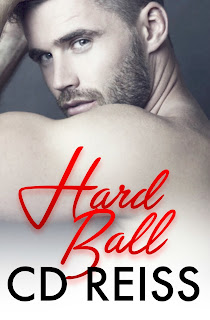 HardBall is a standalone erotic contemporary romance novel from bestselling author CD Reiss. This also happens to be my first ever CD Reiss read and I enjoyed myself immensely as I got to know Vivian Frost, a twenty-five-year-old public school librarian with a love for her father, her job, and baseball, and Dashiell Wallace, the thirtysomething superstar shortstop of the Los Angeles Dodgers who likes to be in control. Nearly everything I was expecting with this initial CD Reiss-read was thrown out the window except for the really steamy scenes between Viv and Dash. This book was lighthearted with just enough angst thrown in to keep things interesting and neither Dash nor Viv were anything like I imagined they would be. I've read quite a few baseball-related sports romances before, but this one is probably the hottest I've come across.

Vivian Frost has plans of getting the autograph of every single member of the twenty-five-man roster of the LA Dodgers, but when a field trip to the stadium ends up with Dashiell Wallace's glove going missing, Viv finds herself ensnared by the attention paid to her by baseball's leading shortstop. Dash is beyond smitten with the librarian who makes him wonder what she's got hiding underneath her boring clothes, but as taken by her as he is, the last thing Dash can afford to do is be distracted by someone who's messing up his long-established routines. Athletes are, after all, a superstitious bunch, but Dash needs the routine to stay in control--control he desperately requires to continue being the baseball player that he is. But Viv is proving to be far more difficult to forget than he thought. Can he keep both the girl and the Gold Glove?

I loved this story that had a good girl and bad boy vibe to it. When Viv and Dash unwittingly ingrain themselves in each other's lives, neither one really expected just how much they would change in the process of falling in love. I liked how Viv tried valiantly to stand by her convictions and I so wanted to smack Dash upside the head when he simply assumed Viv would seamlessly merge her life with his because that was what he required. Don't go thinking, though, that Dash was an ass. He was merely a man who knew what he wanted and believed that he would be able to provide Viv with what she needed in order for her to acquiesce to his plans. Clueless, yes, but no, I wouldn't consider him an ass. As a matter of fact, he was sweet and protective, and the man got bonus points for how great he was with Vivian's elderly father.

This really was a standalone. While there were a number of fine supporting characters, they were all in committed relationships, so I couldn't foresee them having any sort of spin-off novel. This book was all about Vivian and Dash and how they navigated their way from two seemingly opposites to two people who fell for each other and realized what that meant. There were those moments where I couldn't help but go "aww" but those were counterbalanced by those far more raunchy encounters that had me fanning myself from the heat emanating from my tablet. Dash shows Viv exactly what it is he can do for her body and makes her realize what a beautiful and desirable woman she is, but it's Viv who opens Dash's mind to the fact that he is, indeed, a good man and an amazing player. HardBall exceeded my expectations. 4.5 stars! ♥