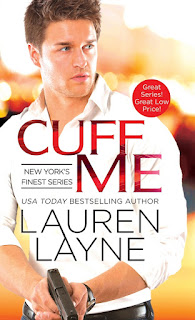 Cuff Me is the third and latest novel in bestselling author Lauren Layne's New York's Finest series and it features the second eldest Moretti brother and police detective, Vincent, and Jillian Henley, a fellow police officer and Vincent's partner for the past six years. The back and forth between Vin and Jill was documented in the first two books--Frisk Me and Steal Me, respectively--showcasing them as friends and co-workers who are more than comfortable with one another. They work well together, in tune with one another and solving their cases, and have an easy friendship, Jill accepting the often grumpy Vin the way he is. When Jill takes a three-month-long vacation to take care of her mother in Florida, Vin isn't exactly the best in keeping the communication lines open, not being a fan of texting. So, when his partner returns, he's secretly excited to have her back by his side and things can go back to the way they were before she left. Will Vin feel the same when he learns changes are on the horizon, beginning with Jill's engagement?

Vincent and Jill are friends, partners, and push each other's buttons like no one else. They're more than comfortable with one another, but an awkwardness neither one has ever felt before comes into play the minute Vin finds out that Jill met someone in Florida and will be marrying him in a few months. They begin to look at their friendship differently, and Vin takes a long, hard look at Jill and who she is and what she means to him. They're opposites in terms of personality--she's like that burst of sunshine and he's like a walking thundercloud--and yet they simply work well, both personally and professionally. It appears that Vincent's family recognized how meant to be they were for years, and were merely waiting for Vin to recognize his feelings for Jill go beyond friendship and vice-versa. What used to be easy between them is now complicated, and to add to their turbulent thoughts is the very first case that they seem unable to crack on the first get-go. Vin and Jill aren't sure what's worse: an unsolved case and unresolved feelings.

This third book in the series is my favorite. With the well-loved friends to lovers trope as its foundation, Vincent and Jill's love story isn't one that started six years prior, although it's clear that Jill's had feelings for Vin for some time now. Falling for one another truly began when they saw that they were going to lose what they have--the friendship, the partnership--and each other, and maybe that was the push that was needed to get these two moving forward. Between the two of them, it was Vincent who evolved most, and can I just say that chapter thirty-six had my heart clenching tightly in my chest because I just felt for the guy, especially after doing what some may see as no big deal but to him it was a huge step? The Morettis may be busybodies who like to get involved in each other's business, but it's difficult to fault them that. Then there's Jill's fiancé, who could have been portrayed negatively but having him as this really nice guy made this story even better, because how the heck do you choose between him and someone like Vincent?

I've enjoyed all three of the books in the series so far, and I really, desperately want Marco Moretti--the only Moretti sibling who isn't in New York--to get his own happily-ever-after, especially after having met his girlfriend in this third book. Both in the book and on Lauren Layne's website, it's written that the series is about three brothers, so of course, that gave me pause. Does that mean there won't be any books for Marco and Elena? The latter is a defense attorney, and I know that a city's "finest" pertains to law enforcement, but how can she not get her chance at the spotlight, right? This fictional family bickers and teases, but the love they have for one another and their jobs is part of the reason they've become a favorite of mine. So, I'm going to keep my fingers crossed and continue to wait and hope that Marc and Elena Moretti get books four and five in the series, because after reading Vincent and Jill's tale of happily-ever-after, I can't help but wish for even more of the same from Lauren Layne. Cuff Me receives five stars. ♥