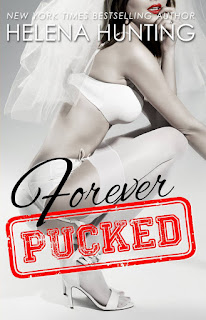 "Listen to me, Violet. You and me, we're meant for each other. Do you agree?"

I laugh, because this is one of the many reasons I love her. There is no one else in the world who compares to Violet.

My love for romantic comedy books was Pucked from the moment bestselling author Helena Hunting introduced the world to Violet Hall and Alex Winters. And while I may have arrived at the party a tad late (*cougheightmonthscough*), this series has been one of the highlights of my 2016 reads and Forever Pucked has brings everything full circle with the impending nuptials between the couple that started it all, Violet and Alex. Now, while I mention the whole "full circle" thing, I'm hoping that this book doesn't signal the end to the series, since I've been hoping (begging!) for two other memorable couples who have played supporting roles in the previous books--Darren Westinghouse and Charlene Hoar (Hoar-ay for her getting a last name...though I'm wondering if it rhymes with "roar", which makes it yet another funny addition to the roster of names--whether a legal one or a nickname--these characters have) and Lance Romero and Tash no-last-name. So, while I snickered my way through the absurdity and naughtiness displayed in this fourth book, I've got my fingers crossed that it won't be the last, because if it does turn out to be the last, I'll be 100% absopuckinglutely devastated.

Violet's got that ginormous engagement ring sitting on her finger but no wedding ring to match it with as of yet. Talking about the yet-to-be planned and scheduled wedding has her breaking out in hives, and Alex has backed off, not wanting to stress her out. Vi wants nothing more than to be spend the rest of her life as Alex's wife; she just can't seem to sit down long enough and not reach out for a dose or two of antihistamine and set a date. She's career-driven and independent, though she's certainly gotten used to all the pampering and spoiling that's come her way courtesy of her multi-million dollar earning fiance. She doesn't want to be rushed down the aisle, no matter how many hints both their mothers drop. After all, she and Alex are a sure thing...until fate sends her a reminder that nothing in life is guaranteed and that sometimes you need a gentle nudge (or a well-disguised but forceful shove) to make you realize that now is as good a time as any to not just make plans but to follow through. Alex and Violet have faced bumps on the road along the way to their happily-ever-after, but this time around, they're up against their toughest test as individuals and a couple, but they won't have to go at it alone.

I loved Alex in Pucked. He was determined to pursue Violet and was so endearingly sweet in the series starter. Here, however, we have a far more vulnerable Alex, and I think I fell in love with him even more. He comes to certain realizations, both professionally and personally, as does Violet, although she tends to deal with those is with her inane and irreverent humor. What I adored about Violet in this fourth book was how she handled things thrown her way with aplomb. Yes, tears were shed and she worried and stressed, but she bucked up and did what was necessary to maintain normalcy and comfort in the home and life she shared with Alex. If there was any doubt how perfect these two were for each other, all anyone needs to do is read this book, which also happens to include the rest of the Pucked gang and fans of the series get to see where the happily committed couples are at. But for all intents and purposes, Forever Pucked is about Alex and Violet they've come (umm...not sure if that pun was intended or not) in the year since they met and later fell in love. That epilogue? It was pucking perfect. MC plus Beaver really does result in us being Forever Pucked. Five-plus stars. ♥

Read my review for the Pucked series: