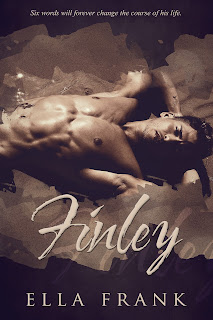 The silence that surrounded them as securely as a cocoon blocked out the rest of the world. Because, just as it'd always been with Finn, when the two of them were together like this—naked, souls bared to one another—nothing else existed.

The Temptation series is one of the most highly recommended series a lot of my fellow bookaholics have insisted I must read. Even before I could finally find time to read the trilogy, author Ella Frank announced its spin-off, and when she told me I could read it as a standalone, I went ahead and did so. And now, not only am I absolutely in love with all things Finley, I'm even more desperate to read Try, Take, and Trust, and all it took was a snippet that included Logan Mitchell and Tate Morrison. But I digress; this review is all about Daniel Finley and Brantley Hayes, two former lovers who were forced to separate, with Finn staying in Chicago for seven years while Brantley remained in Florida to continue with his career. This is a second chance romance that was also a teacher-student love story—something I wasn't expecting when I read the synopsis. There's a lot of anger and resentment that Finn has been carrying with him for seven years, and with six words, he decides it's time to confront his past and then to finally let go of it afterward.

When Finn and Brantley first met, the connection between them was clear, but while was more than willing to pursue it, Brantley recognized what it would mean and the risks that it would entail. But when Brantley finally stopped denying his feelings for Finn, theirs wasn't some temporary fling. It lasted four years before Brantley made the decision to give Finn the push he believed his student needed to better prepare him to fulfill his dreams of becoming a lawyer and that decision broke them far longer than even Brantley expected. When Finn returns to their beach town after a seven-year absence, he is somewhat removed from the relaxed, carefree guy who lived for the sand and surf, adored his mother and sister, and loved his teacher he once was. Brantley never thought that what he believed that a thoughtful act would lead to him losing the boy he loved, but he's willing to do anything to make amends and prove no one can come close to nor would he even considered replacing Finn in his heart. The question is: will Finn let him?

This was such a well-written story of love, but not really of love lost that's been found again because the love between Finn and Brantley was always there, even in the midst of all the negative feelings Finn had swirling within him. He changes during the years they were apart, but the one thing that never did was how much he loved Brantley, even though he couldn't fully fathom or accept what Brantley did. Their story is told from a third person point of view and with flashbacks. The glimpses into their past were lovely to read because we get to see how they met and fell in love and how their relationship progressed and why it came to an end. Everything that happens in present time shows Brantley trying to regain Finn's trust and seeking redemption, even though his reasons for sending Finn away were not malicious. This was a book about finding the one, doing what you believed was right by letting go, then fighting like hell to win that love back. See why I'm highly recommending Finley and am so obsessed with all things Finn and Brantley?

I loved Finn and I felt for the guy because he was so badly hurt by what happened seven years ago and yet there's no denying how much he still feels for Brantley. I admit that there was a part of me that was none to happy with dear, old professor because I felt that his actions then were both selfless and selfish. Selfless because he wanted to offer Finn the opportunities he believed Finn was denying himself because of their relationship; selfish because he stayed in Florida to stay on track as far as his teaching career was concerned and without the distraction that was Finn. Of course, my cynicism may be due, in large part, to Finn becoming Daniel—the detached version of himself. Yes, yes, I admit it. I liked Finn just a teeny, tiny bit more than Brantley, but the latter won me over with what he did in the final two chapters of the book. I'm itching to find out about the curious pair of Derek Pearson and Jordan Devaney, Finn's best friend and Brantley's best friend, respectively, but my Finley hangover is all about Finn and Brantley. Five-plus stars. ♥